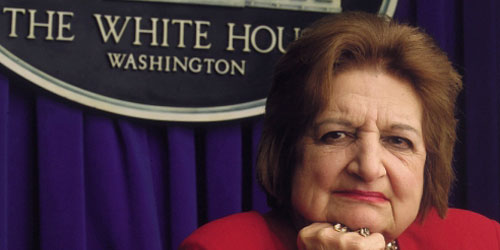 Liberal Helen Thomas has spoken. Just imagine that voice, that god-awful nasally voice, coming to you from beyond the grave.

And what is it saying? Journalists need to be more liberal.

Apparently, the media is a “lapdog” organization to Presidents.

Well, the last five (or so) years have proven her right about that one.

From the Washington Times, a quick quote: (Not a paraphrasing, a quote!)

A liberal seeks the truth and doesn’t put the spin on anything and asks to look at the facts. I think liberal correspondents are honest. I don’t mean the others are dishonest, but what I mean is–I don’t think that liberals, liberals have an axe to grind except they really do want a better world.”

Thomas then asked the interviewer to scratch out the last thought and replace it with this:

“I think liberals care about people and they also care about the facts. Liberals try to speak the truth and let the chips fall where they may. Sometimes it falls in their direction, sometimes it doesn’t. But there is no such thing anymore as the liberal press. I’m looking for a fellow liberal.”

Was that what NBC was doing when they edited George Zimmerman’s 911 call?

Was that what Dan Rather was doing with the fradulent accusations against George W. Bush?

Was that what MSNBC did when they completely edited out the skin color of a black TEA Party member?

What about George Stephanopoluos’ contraception question, or the charade of “testimony” by Sandra F-luck?

Liberals do not care about facts. Ever.

What they care about is their opinion being portrayed as fact. Also, if Helen Thomas could not find a “liberal” in the media in that regard, how in the bloody hell could she call herself a journalist?

Does this sound like a “caring person who wants a better world”?