NPR, as a part of MSM, is not a conservative’s favorite radio listening, nor editorial reading.

But every now and again NPR highlights an article or program worth note. And Wednesday was just such a day, as the resurgence of a 40-year-old photo inspired an editorial.

In late July 1973, Joseph Crachiola was wandering the streets of Mount Clemens, Mich., a suburb of Detroit, with his camera. As a staff photographer for the Macomb Daily, he was expected to keep an eye out for good feature images — “those little slices of life that can stand on their own.” 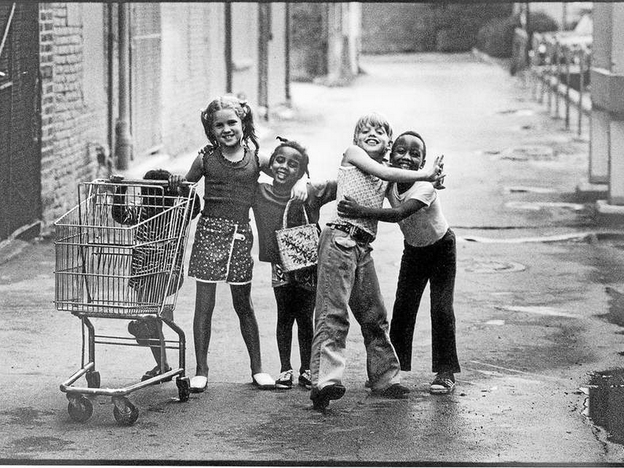 This 1973 photo of five children playing in a Detroit suburb has gone viral on the Internet. The children were Rhonda Shelly, 3 (from left), Kathy Macool, 7, Lisa Shelly, 5, Chris Macool, 9, and Robert Shelly, 6.
Joe Crachiola/Courtesy of The Macomb Daily

Bates continues, painting a Norman Rockwell setting with her words:

The slice of life he caught that day was a picture of five young friends in a rain-washed alley in downtown Mount Clemens. And what distinguishes it are its subjects: three black children, two white ones, giggling in each others’ arms.

“It was just one of those evenings,” Crachiola remembers. “I saw these kids — they were just playing around. And I started shooting some pictures of them. At some point, they saw me and they all turned and looked at me and struck that pose that you see in the picture. It was totally spontaneous. I had nothing to do with the way they arranged themselves.”

This week, Crachiola, who now lives in New Orleans, posted the vintage photo on his Facebook page.

“For me, it still stands as one of my most meaningful pictures,” he wrote in his post. “It makes me wonder… At what point do we begin to mistrust one another? When do we begin to judge one another based on gender or race? I have always wondered what happened to these children. I wonder if they are still friends.”

After several days when the world seemed to be reduced to one big argument about race, the elegantly simple photo hit a nerve — in a good way.

The picture does elicit a smile: Joseph Crachiola captured a simpler time when Civil Rights had won, and yet the militant progressive, race-baiting hadn’t quite taken over. All these kids knew was that they were friends and happy to pal around.

How great would it be to get back to that? To stop reading so much into every word and just let kids be kids?

Why does this photo make us smile?

The joy of these kids, unencumbered by bitter agendas, touches the heart. And this is the way it should be.