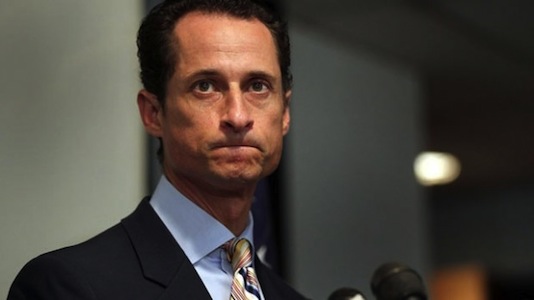 I don’t suppose it will matter very much to the degenerate Democrat political culture that was seriously considering him as the next mayor of New York City, but it turns out Anthony Weiner sent even more lewd text messages to at least one woman who was not his wife, after he resigned from Congress in disgrace back in 2011.

Images of his crotch were once again involved. He used an alias named “Carlos Danger.” His appetite for humiliating both his wife and prospective constituents appears boundless.

Weiner didn’t come clean about any of this voluntarily. He was caught by a website called The Dirty, which refers to the recipient of Weiner’s lewd messages as “the victim.” The Victim claims her online relationship with Anthony Carlos Danger Weiner ran from July to November 2012.

There was allegedly some phone sex, and talk of feathering a love nest in Chicago. He even promised to get her some kind of blogging job at Politico. Surprisingly, he never got around to offering her an ObamaCare waiver.

Visit NBCNews.com for breaking news, world news, and news about the economy