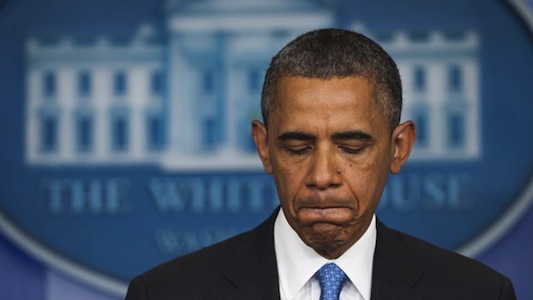 Whenever Barack Obama “expands on [his] thoughts a little bit,” America is in for an eye-opener, which is exactly what happened when he recently crashed a press briefing to comment on the George Zimmerman trial.

Exposing his true colors, the president extended condolences to the Martin family and completely ignored the Zimmerman family, which has also endured considerable pain during what Obama admitted was a “tragic situation.”

Much like Michelle personalizing the fatal shooting of Hadiya Pendleton in Chicago, Barack Obama took the opportunity to make Trayvon Martin’s death about – you guessed it – Barack Obama. Exhibiting the height of narcissistic self-absorption, the president, having previously suggested that he could be Trayvon’s father, on this occasion declared that he could be Trayvon Martin himself.

Barack Obama takes responsibility for nothing. So rather than censure a rap culture or a political party that has cultivated a caustic mindset in black youth, again the president sought out scapegoats for the irate response he and other race-baiters are subtly encouraging in the black community.