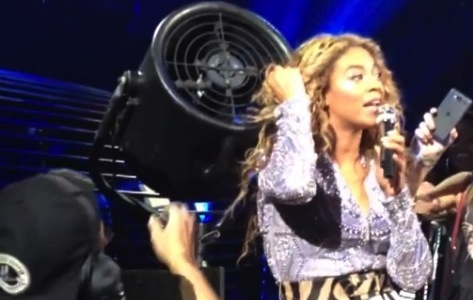 Not a fan-fan like a stage fan, but one of those used to blow around J. Lo’s or Beyoncé’s flowing locks in order to make them look like they’re able to maintain the glamour edge in the midst of a 100 mph hurricane gale.

Reminiscent of the late Michael Jackson’s hair catching fire during the taping of a Pepsi commercial, Beyoncé, Pepsi’s newest spokesperson, had her hair entangled in the fan blades mid-song while she was performing her hit Halo.

Bey should be thanking God that she wasn’t wearing that anatomically correct outfit that she dons during the concert because there might have been something besides her hair that needed to be cut loose.

Fresh off joining another guy known for his famous hair, the Rev. Al Sharpton, at the ‘Justice 4 Trayvon’ rally at One Penn Plaza in New York City, Beyoncé was in Montreal when the calamitous fan attack occurred…