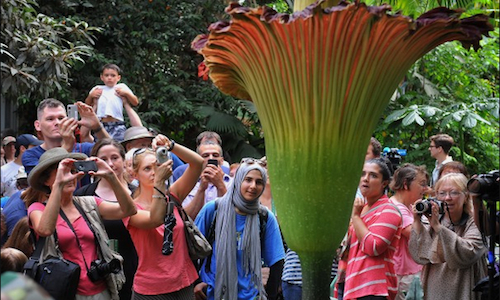 There have been floods, burning bushes, and now, right smack in the middle of modernity, God is confirming something most Americans already know about Washington, DC politics.

The titan arum, also known as the “corpse flower,” is blooming in the U.S. Botanic Garden right next door to the U.S. Capitol.

In a greatly anticipated event, any minute now visitors will have their olfactory senses bombarded with the nauseating stench of rotting flesh. Only this time it will be from a botanical exhibition, not from what is wafting over from the mortuary next door.

Botanic Garden officials expect the smell to “peak” right around the time immigration reform is in the heat of discussion. The corpse flower will remain open anywhere from 24-48 hours, just long enough to add the appropriate scent to a legislation that, if it all goes Obama’s way, will finally transform America’s future into a malodorous, decomposing cadaver.

The titan arum is native to the tropical rain forests of Sumatra, Indonesia. Poignantly, the last time the Botanic Garden corpse flower bloomed was in 2007…