Not only did Lyndon B. Johnson most likely steal the 1948 Senatorial election, he was also WRONGLY attributed for championing civil rights laws! 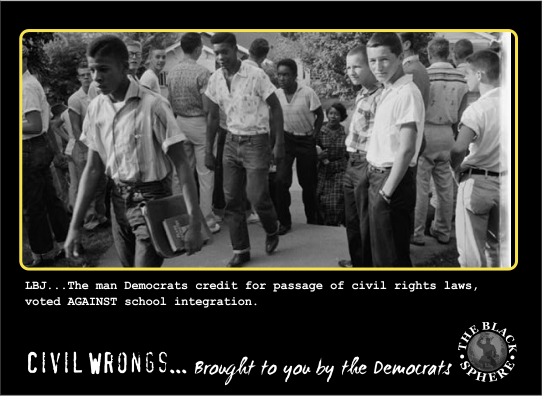 Another exclusive graphic of Civil Wrongs…

It was the Republicans who fought for and were responsible for the passage of civil rights laws, not LBJ. Revisionist history, taught by Liberal dogma saturated educators, has propagated lies about the civil rights movement for almost 50 years!

“These Negroes, they’re getting pretty uppity these days and that’s a problem for us since they’ve got something now they never had before, the political pull to back up their uppityness. Now we’ve got to do something about this, we’ve got to give them a little something, just enough to quiet them down, not enough to make a difference. For if we don’t move at all, then their allies will line up against us and there’ll be no way of stopping them, we’ll lose the filibuster and there’ll be no way of putting a brake on all sorts of wild legislation. It’ll be Reconstruction all over again.”

Lyndon Johnson, who represented the [former] Confederate state of Texas and had been installed in his position by Southern Democrats precisely in order to block civil rights legislation. Until the 1950s, Johnson’s record of opposition to all civil rights legislation was spotless. But he was ambitious and wanted to be president. . . .

After dragging his feet on the civil rights bill throughout much of 1957, Johnson finally came to the conclusion that the tide had turned in favor of civil rights and he needed to be on the right side of the issue if he hoped to become president. . . .

Time to set the record straight and The Black Sphere intends to do just that!