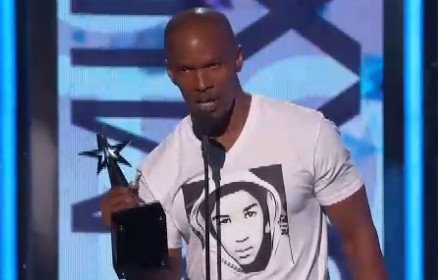 Jamie Foxx is at it again. Never let a fake crisis go to waste while pandering to an audience.

Think Jamie Foxx cares about all the other black kids being killed…by BLACK people? I doubt it, because you don’t get undeserved awards by being real. And Jamie and his Lefty Hollywood posse call black conservatives the sellouts!

Jamie Foxx and other fraudulent Liberals, especially the black ones, don’t care at all about black murders.

The only lesson a heathen like Jamie Foxx will understand is a fiscal lesson. Boycott his films. Let him make his money from Obama and the minions who also believe Obama to be baby black jesus [note intentional lower-case of Jesus].