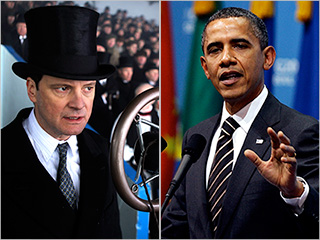 Much has been made about Obama’s impromptu crashing of the press briefing at the White House the other day to weigh in yet again on Trayvon Martin’s death.

Obama’s speech reminded me of the movie The King’s Speech, where the man who would be king of England had to give just one good speech, so all of England would feel comforted.

I chuckled at the big deal made by “reporters” that the man who is supposed to be a great orator and “Leader of the formerly Free World” did so without his “blankie,” the trusted teleprompter.

“Look at him,” the lamestream press marveled. “He’s not using a teleprompter! See he is NOT the Affirmative Action president.”

Leftist pundits were as easily impressed as the reporters — I heard some say that Obama’s speech seemed “personal,” not realizing that they were intimating that his other speeches were not.

In his speech, Obama created a fictional scenario where HE could have been Trayvon 35 years ago. And that is supposed to nourish the nation? “There but by the Grace of God go I?”

Why would a president compare himself to a hood rat like Trayvon Martin, one might think? It seems pretty obvious that Obama secretly wishes he had led that black experience that he proffers so readily.

Pre-Senate Obama was a child of privilege, raised by two white people, and educated at America’s finest white institutions. And what “articulate and clean,” non-threatening black man hasn’t heard car doors lock as he approached white people sitting in a vehicle, the occupants no doubt stalking him? Uh…not one.

Obama has been “acceptable” to whites his entire life. He has relied on that. Selling his blackness has been the trick.

Does anybody believe that Obama has been followed in a department store, or that a woman would clutch her purse because Obama joined her on an elevator? According to Obama, bad behaviors by white people are because of their latent racism—latent racism defined as racism that you don’t even know you have, because you are NOT RACIST. The fact is, most of black people who experienced the racism of Democrats of the ‘50s and ‘60s are dead.

But that hasn’t stopped Liberal institutions, like the the media and academia from reminding young black kids of that tainted past, and making young white kids feel guilt for that same past. Academia teaches younger blacks how to exploit the idea of “racism of whites”, and how to guilt whites into allowing blacks to become the biggest criminals in American history.

In his speech, Obama called black people’s criminal behavior, “frustration.” After all, black people of the last 40 or so years have had a difficult history. You know…with no slavery and no lack of Civil Rights and all this opportunity in America that has created the largest black middle-class in history.

No black teen (or person under 40) can seriously relate to the narrative that Obama discussed in his speech. Yet, Obama said that black people are upset about the Zimmerman verdict because appeared that the jury was ignoring blacks’ frustration.

Spoiler alert: They were!

Obama wants you to believe that black people of the past 40 years have become more benevolent. Black people are more peaceful and tolerant, right?

Obama and other Liberals have essentially given young blacks a license for mayhem. Obama’s “greatest generation” is comprised of miscreants and street thugs. And they don’t limit their mayhem to non-blacks, but in fact commit crimes on other blacks in staggering numbers. On Piers Morgan’s show, Larry Elder estimated that 3 percent of blacks commit nearly 50 percent of crimes.

Obama acts as if white people don’t get carjacked by blacks; those crimes are figments of white people’s imaginations. Obama acts as if black people don’t steal from stores, and that white women don’t get their purses snatched. There is a reason white people click their door locks when they see black teens, why some salespeople follow some blacks through stores, or a white woman might clutch her purse in the presence of a black man. It’s called reality. And that very real reality is based on history that Obama glosses over, if he doesn’t outright ignore it. Obama ignores the truth, because the truth doesn’t pay the bills; but creating racism narratives pays off big time.

So the king’s speech is more empty rhetoric. But at least he didn’t need his pacifier–the teleprompter.