School officials in Carmel Clay, Indiana are now claiming that because hungry children refused to comply with healthy lunch menu options that were foisted upon them by Mama Obama (a woman who – trust me – never goes hungry), $300,000 in school funding was lost.

Just like other things in life that aren’t worth enduring for the sake of money, neither is the National School Lunch program.

In due time, maybe this particular district will opt out like other school districts are doing.  Then, besides seeing kids eat lunch again, for the first time ever educators in Carmel Clay can be amongst those responsible for seeing formerly famished American children actually weep for joy while at school.

Amy Anderson, one of the food service directors for the school district, said the first lady’s guidelines made her feel more like a “food cop” than an educator.  So much so that Ms. Anderson considered retiring early. Now that gives new meaning to “Let’s Move!” If Anderson takes the retirement plunge, Michelle Obama can then claim credit for using Brussels sprouts as an incentive for state workers to seek early retirement.

Nonetheless, another food service director for North White School Corp., Linda Wireman, explained that while Michelle Obama is free to chow down on things like ancho chile-braised bison short ribs, hominy grits, and wild mushroom sauté whenever she wants, her severe school lunch regulations are unrealistic and the kids hate them.

Then, if those three-quarters of a cup of vegetables are something the children don’t like, which is the case three-quarters of the time, complaints follow, veggies are scraped into the garbage disposal, and kids spend the rest of the day with an empty stomach trying to concentrate on schoolwork.

Tippecanoe School Corp.’s food service director Lori Shofroth shared that in addition to having to endure starving, cranky kids, wasted food negatively affects the district’s budget. Although not accusing her directly, Shofroth intimated that the first lady’s plan teaches students that it’s “OK to throw away.”

In fact, so much food was discarded that a waste study involving three different schools showed that huge amounts of food including fruit, vegetables, and milk ended up in the trash bin.

Exercising the right to choose that Mrs. Obama and her husband are always blathering about, some students chose another route.  Instead of hitching a ride to the local abortion clinic in the school athletic van, and rather than endure the pain of three-quarters of a cup of lima beans, many Carmel Clay students skipped lunch completely.

The loss of lunch customers was so great that it resulted in a $300,000 decrease in funding for the school district.

Besides, the more determined students just wait it out until they leave school, and then “hop in their BMWs and go to McDonald’s.”

Amy Anderson maintains that just like Michelle Obama has been known to bop on over to the Shake Shack for a 1,700-calorie lunch whenever the mood strikes her, children in Carmel Clay, Indiana, “can stop at Panera and pick up a sandwich that meets none of [the] criteria” imposed by the bossy woman slurping on a 710-calorie Chocolate Shake. 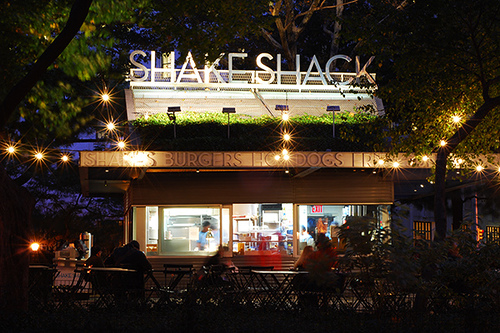