Yesterday I quickly wrote an article concerning the repugnant cover of the current Rolling Stone issue.

Rolling Stone, by its very nature as a magazine ensconced in the world of rock and roll, has never been a bastion of conservative thought, nor should it be. But what the publication should be is responsible and aware that glorifying terrorists is tawdry, unAmerican and brutally calloused.

A clever graphic artist has since rendered what SHOULD have been on the cover! 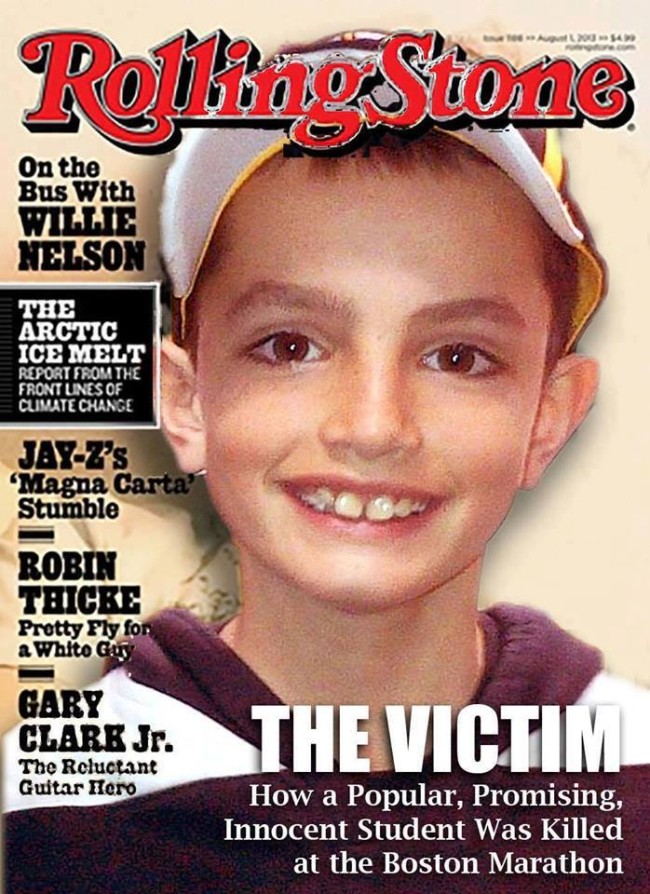 “The survivors of the Boston attacks deserve Rolling Stone cover stories, though I no longer feel that Rolling Stone deserves them.”

Over the years, the magazine staff has stuck to the mission of its founding editor, Jann Wenner: to penetrate American culture and politics.

“Jann’s passion for politics goes way back,” said Robert Wallace, a former managing editor. “Jann deserves the credit for staying the course. A lot of magazines have lost their core mission and beliefs. Jann knew what he wanted and still knows.”

Wenner, now 64, founded the magazine in 1967 in ragtag offices in San Francisco. He was, by all accounts, the quintessential fan obsessed with the characters at the core of the music counterculture.

In the mid-1970s, Wenner moved the offices of Rolling Stone to Manhattan. The magazine gained readers, cash and power, and also began changing to follow its aging demographic, Dumenco said.

I would submit that this anathema of a cover does NOT represent Wenner’s mission “to penetrate American culture and politics”. The current Rolling Stone cover was intended to shock, and perhaps garner readers from the reality TV-watching, non-discerning small percentage of Americans.

Rolling Stone, you can penetrate culture and politics. But enough with the near-traitorous cover.

The above image echoes Mayor Menino’s words. Let’s make THIS image go viral and perhaps people can tweet suggestions of what to do with the current Rolling Stone issue?

Related: Terrorist on the cover of Rolling Stone