So, Anthony Weiner is in the news again.  It seems he cannot stop flashing his namesake to the world.

Or, at least, to “the elect,” my new name for the women he pervs on across the internet.

Of course, more frightening than his fondness for fondling are the people who rush to his defense, including this ridiculous bit by Tamara Holder. 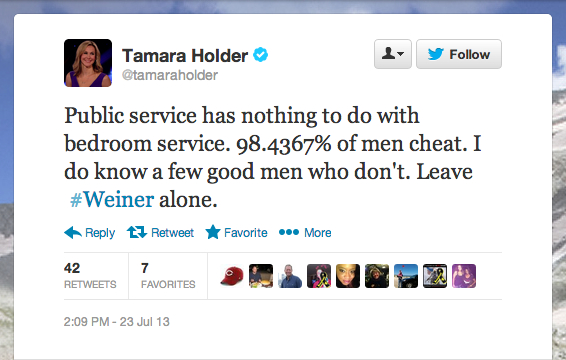 Notice a pattern, however.  Whenever a Democrat has a scandal (particularly sexual impropriety), it is rare where they’re ever truly vilified and shunned.

Anthony Weiner is already running for mayor after resigning in disgrace two years ago for being a pervert on the internet.  Eliot Spitzer has joined his campaign, seeking a position in the Weiner administration, despite cheating on his wife with multiple, high-class prostitutes.

Bill Clinton is, of course, still well respected, despite being a serial cheater, sexual harasser and accused rapist.  And of course, the late “Lion of the Senate,” Ted Kennedy, was accused of leaving a woman to drown in his car, yet he was the greatest champion the left ever had.

The only Democrat to ever be truly destroyed by his poor choices in sex and lust seems to be John Edwards.  Even the staunchest defenders of the scummiest politicians the Democrats have to offer could not forgive a man who cheated on his cancer-riddled wife. But I wouldn’t count out his ability to reappear down the road.

Now, that’s not to say Republican politicians don’t have their scandals.

However, even when men men like Newt Gingrich and Mark Sanford return to the fold of politics, they are neither lionized nor greeted enthusiastically. Certainly they have their supporters, but the respect they once garnered never quite returns.

Note, the major problem with sexual misconduct scandals isn’t so much the sex, but rather what the scandal implies about a person’s character.  The former has little bearing on one’s job performance in politics or anything else.  However, being unfaithful to one’s spouse does suggest that one is duplicitous and untrustworthy.  If a person can break a vow to be loyal and faithful for the rest of his life, what will he do to a few million constituents whom he does not know?

Yet, leftists don’t seem to care.  For the progressive, the truly dangerous elements, what matters, is a person’s ability to push the progressive agenda. Character is irrelevant as long as the person believes the “right” things.

For the rank and file liberal, the dedicated Democrat voter and defender, it is harder to understand.  The simplest explanation seems to be the best answer, however: the moral breakdown of society causes people to gloss over the moral character of their elected officials.

Society today is taught to no longer make moral judgments (except of Christians, whites, men, conservatives, et al.) and thus people no longer judge others.

And unfortunately, and sadly, this extends to the people given power over our lives.

What happens when we put dishonest, untrustworthy persons in positions of power? Broken promises, ruinous legislation, and officials with no shame nor qualms about using the power of government organizations for political expediency.