For the past two weeks Texas has been hot…not only mid-summer, burn-your-buns on the car-seat hot, but politically, vitriolic partisan hot.

Austin has served as ground zero for the so-called war on women, and Planned Parenthood has pulled out all the stops to bring the abortion debate back to where it first began in 1973– Texas.

But there is more at stake here than the media are reporting.

While it’s true that the Texas State legislature are working overtime to enact a rather sensible law requiring abortion clinics to carry the same safety measures as your average dental office or any other location that performs surgical procedures, the fervor and intensity of this fight has drawn national attention. Even the attention of the President who, during the now infamous State Senator Wendy Davis filibuster, tweeted, “Something special is happening in Texas.”

What’s interesting is that this bill banning abortions after 20 weeks – the point at which scientists and doctors certify babies feel pain – is strikingly similar to laws that have already been adopted by 24 other states. It’s even far less restrictive than the North Dakota Heart Beat bill that was passed last spring banning abortions past the 6-8 week period.

Still what’s happening in Texas has received far greater media coverage than any of its predecessors. 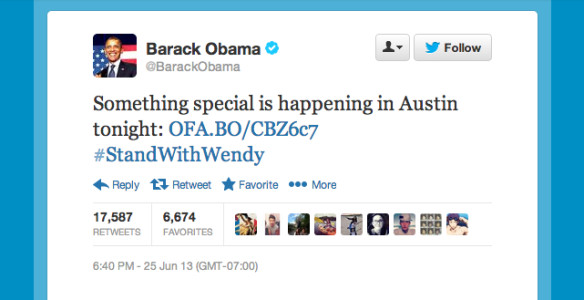 So what about this Texas bill has provoked comments from the President and even compelled Planned Parenthood President and CEO Cecile Richards to hop a plane to Austin at the height of the debate? It’s the old adage “things are always bigger in Texas,” and unfortunately that even holds true to for abortion. Despite its very prolife leanings (62% of Texans support banning abortions after 20 weeks), Texas ranks fourth in the country for the number of abortions performed annually.

Every year nearly 75,000 unborn children are aborted in Texas. When translated into dollar signs, these 75,000 abortions represent anywhere from 30 million to 55 million in revenue, depending on the abortion procedure administered. In a state where the governor recently dismantled taxpayer funding for the nation’s largest abortion provider, Planned Parenthood is in panic mode working tirelessly to plug their profit leaks in the Lone Star State. Hence the surprise appearance of Richards at the Austin rally.

Don’t kid yourself, this is not about women’s health, or even choice. It is about one thing and always has been: money.

As a multi-billion dollar industry built on the backs of compliant pro-abortion supporters, Planned Parenthood, in an effort to protect their power and influence, has cleverly disguised the abortion debate as “standing up for women’s health.” Cecil Richards’ six figure salary, largely subsidized by nearly a half billion in taxpayer dollars, depends on the blood money derived from the continued killing of tens of thousands unborn Texans. Sadly, for the scores of orange shirted -protesters outside the Austin Capitol building, they have no idea they’re being played as pawns.

As I listen to the testimonies about how the “pain-capable” law will result in the closing of dozens of women’s clinics, resulting in less medical care for Texas women, I can’t help but wonder why these so-called “women’s clinics” don’t just abandon abortion procedures altogether and instead focus on those issues they claim to care about most – screenings, cancer care, and family planning.

Could it be that the numbers just don’t add up? In other words, without the revenue brought in from their abortion practice, these “women’s clinics” cannot exist as a stand-alone medical center. The essential women’s medical care that we hear so much about – the screenings, the family planning, the women’s well check-ups – merely serve as a bait and switch to drive future abortion clients in the door.

And much like the toy that comes with a Happy Meal, these services keep the client coming back for more with the belief that they’re being serviced, when in truth they are being targeted for the much more lucrative abortion procedure.

Planned Parenthood has a good thing going here in Texas, so don’t expect them to compliantly surrender their fourth largest market in the nation. Even when this bill passes – as it likely will – democrats will ride the wave of feminist activism as they continue to make the tired and meaningless “war on women” a central issue of their next campaign.