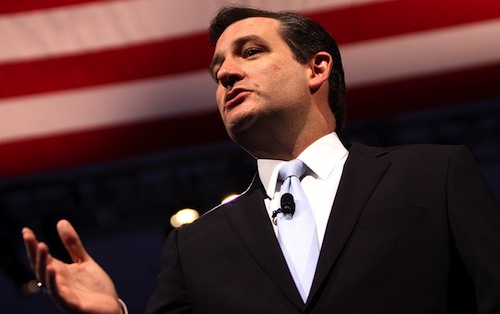 Well, the “birtherism” (aka birther conspiracy proliferation) begins anew, on the left.

Let’s all remember it was Hillary Clinton who let the birther cat out of the bag. A bag probably marked “Made in Kenya”.

Yes, the greatest conspiracy theory since the magic bullet, and the one that has provided the political left with a large amount of ammunition for comedy, satire, and anger has come to roost in the ranks of the GOP.

Is Ted Cruz a natural born citizen? The real question is can he run for President in 2016?

I bet Hillary’s camp is going to be knee-deep in this one.

But let’s suppose he can’t. There is a bigger question here. Why is Ted Cruz so popular that he is a viable candidate for the office after less than two years in the Senate? (that’s sounds familiar) We’re experimenting with a guy like that right now, and the results ain’t good.

The answer, however, is really good: Ted Cruz actually sticks up for the people who voted for him and against the people who are his political opponents. Democrats are literally afraid of him, and conservatives hail his constitutional principles.

So why is he the only one doing this? I mean the last thing we need is an immigrant coming in and taking jobs American-born Senators should be doing (Lindsey ).

You want to be a Presidential candidate in 2016?

Copy the guy who is causing an examination of the law and fight for us. You’d be amazed at what we’ll do in return.

Wanna see how libs think about Ted Cruz, by the way? Just this clip alone is enough to justify my vote.