The back-alley/clothes hanger crowd is showing their true colors. Seems as long as a baby dies, they don’t care who kills it.

The truth is, if hangers were the only option, the pro-choice enthusiasts would train someone to do it, and as long as a fresh hanger was used for each abortion they probably wouldn’t mind a bit.

In the state of California, a bill approved by the state Senate that wants to expand the list of people who perform abortions is one step from Governor Jerry Brown’s desk, where it’s sure to be rubber-stamped.

That’s right. Ms. Atkins wants to place an aspiration hose in the hands of anyone with the stomach to handle it, flip the switch, and use brute force to dismember a living, developing baby.  The extraction process would suction the pieces into a glass bottle to be inspected for missing parts and then relocated to the biohazard bag to be shuttled to the crematorium.

And guess what?  The Senate approved AB154 25-11 before sending it back to the Assembly for a final vote on amendments.

What’s next, the guy at the Slurpee machine at the local 7-11 taking continuing education classes to get qualified to perform quickie abortions with an old Electrolux and the promise of a complimentary Big Gulp?

The reason that any Tom, Dick, or Mary can now fulfill their homicidal fantasies comes compliments of liberals who use excuses like “a girl may come from an abusive home” to justify non-parental notification laws. Or “poor women need abortions too,” to justify pick-pocketing pro-life Americans for money to dole out free abortions.

And then there’s “kids are gonna do it anyway,” to provide free condoms to 11-year-olds. And the pièce de résistance: requiring “voter ID discriminates against illegals without cars.”

The newest liberal atrocity touts the need for professionals to be trained to perform suction abortions to accommodate women in rural areas with limited access to murderers willing to kill their unborn children.

Senator Hannah-Beth Jackson (D-Santa Barbara), who carried the measure in the Senate, said that about half of California counties lack abortion providers.

Parroting the usual liberal claptrap, Ms. Jackson said, “All women deserve access to care in their local communities.”  Translation: Abortion clinics should be as accessible as the local CVS pharmacy.  In fact, why not do abortions at CVS?

According to Hannah-Beth, a real bastion of health and safety precautions:

“The procedure is safest when performed early, yet women in rural areas often have difficulty arranging for and traveling to a provider.”

Voice of reason Senator Joel Anderson (R-Alpine) said legalized abortion was supposed to end the wire hanger days that put women’s lives at risk. Anderson argued that Atkins’ bill would permit abortions to be done in clinics without sufficient backup to deal with complications, by providers who have less training.

What Joel Anderson doesn’t understand is that the bill requires eager abortionists to get specific training and follow standard procedures.

You know, sort of how Eileen O’Neill, a woman with a wealth of experience, posed as a doctor and followed standard procedures when disposing of children born alive in botched abortions. Eileen was an integral asset to Dr. Kermit Gosnell’s infamous Philadelphia abortion clinic.

That’s precisely why the bill should be named the “Kermit Gosnell Abortion Access” bill, wherein abortion becomes so easy even an un-aborted child could do it.

Hannah-Beth Jackson responded to criticism by saying that the health experts receiving training after the bill passes have already been performing abortions for six years without major problems.

For who, the woman in the stirrups…or the dismembered casualty in the waste bottle? 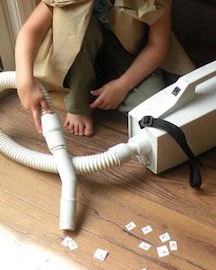