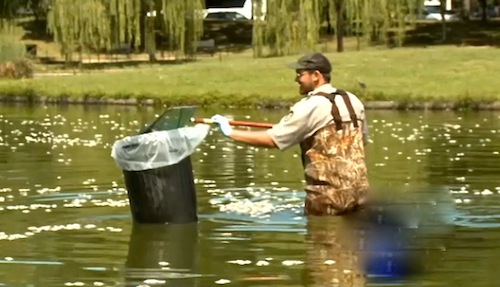 It’s official! The water in Washington DC is toxic, and we have 535 members in the 113th Congress and a disaster of a president… oops, sorry… 1,000 dead fish in the National Mall pond to prove it.

The site of the dead fish is Constitution Gardens, which is located in West Potomac Park near Constitution Avenue and 17th Street NW.

In addition to the fetid pond filled with decomposing fish corpses, that’s also the area in the park that features a memorial to the 56 signers of the Declaration of Independence, all of whom, although not floating in the pond, risk triggering an earthquake because they’re likely rolling over in their graves.

According to the National Park Service, 1,000 putrefying fish were found in Constitution Gardens Pond.

In response, rather than address the noxious stench and the ongoing contamination of the document for which the pond is named, the National Park Service chooses to blame construction in the area for the slimy, bloated carcasses stinking up Capitol Hill.