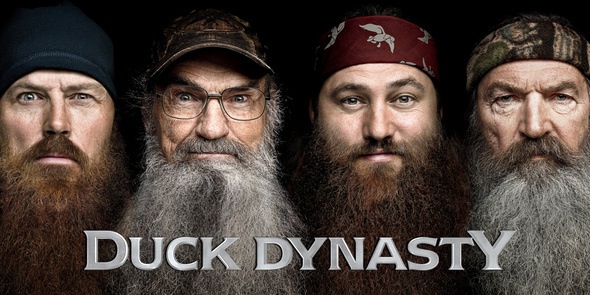 A Trump International Hotel employee thought he was doing the elite establishment a favor when he helped the bearded man in the lobby, not to the requested men’s room, but to the street.

Imagine his surprise when he learned the camouflage-wearing man was not, as he surmised, a homeless person, but rather, Jase Robertson, one of the stars the successful reality show, Duck Dynasty.

The Louisiana-based Robertson family was in the city to promote the up-coming season of their A&E hit show.

For his part, Jase didn’t pull an Oprah and WHINE to MSM about prejudiced, high-rate hotel staffers, but laughed the whole thing off saying:

“I think it was a facial profiling deal…I asked where the bathroom was and he said ‘Right this way sir.’ He walked me outside, pointed down the road and said ‘Good luck.’…my wife said ‘What happened?’ and I said I just got kicked out.”

Jase and family had rooms at the tony hotel, courtesy of the “Live with Kelly and Michael” show.

Watch and laugh as Jase, Phil, Willie, Si and Jep Robertson make light of the staffer mistake. This is priceless!

Any wonder the series is so popular? The Robertson family makes Americans smile and feel good with their home-spun, self deprecating humor chock full of faith and duck hunting. Ah…God and guns!