The Obamas have a new Portuguese water dog for American taxpayers to support, and her name is Sunny.

Now big brother Bo will have a partner in messing up the South Lawn and a mate to keep him company besides his personal security detail when he flies to various vacation spots on Marine One.

The choice was somewhat sentimental. Sunny was born 14 months ago, during the 2012 campaign, and hails from Michigan, home of Detroit, the city Obama helped bankrupt.

Initially, after Sunny was introduced to the world, animal rescue advocates were somewhat insulted that the Obamas chose a purebred puppy and didn’t adopt a rescue dog.

After congratulating the Obamas on their new family member, and grateful for the pittance the first family threw in their direction, the Humane Society of the United States said this:

As we always say in such circumstances, we hope the Obamas considered adoption or rescue as the first choice in obtaining a pet. We are pleased to learn that the First Family made a donation in Sunny’s name to the Washington Humane Society, which shows the family’s awareness of and concern for the problem of homeless dogs and cats in our nation.

For context, it is clear that like everything the Obamas do, their duplicity is revealed even when bringing home a new puppy.

Here’s how. The first family adopts a purebred Portuguese water dog which, if purchased from a high-quality breeder, costs about $2,000. To stem the tide of criticism for choosing not to adopt from the Humane Society, they say the choice was only made to accommodate Malia’s allergy to dogs.

Then, they bestow a generous donation on the local pound.  As a result, the excuse, and the endowment, become an insurance policy to prevent anyone from accusing Mr. and Mrs. Obama of not being aware or deeply concerned about the “problem of homeless dogs and cats in our nation.”

Sorry, but contributing to a pound in honor of adopting a purebred dog from a kennel is like a pregnant woman being lauded for shuttling other pregnant women to an abortion clinic.  Has the Humane Society forgotten that Michelle Obama is the woman who shows care and concern by working in a soup kitchen wearing $540 sneakers?

Moreover, can bootlicking animal advocate types be bought so cheaply that they are placated by the “hope [that] the Obamas considered adoption or rescue as a first choice in obtaining a pet?”

Hello!  If the Obamas considered adopting a rescue dog, why did they choose a purebred puppy and not a blind crossbreed hobbling around on one leg?

What Americans need to understand, including the Humane Society of the United States, is that when it comes to the Obamas, symbolism has nothing to do with substance.

What they say isn’t even remotely related to what they do.  Obama supporters soothing themselves by hoping Michelle and Barry ‘considered’ something they never ‘considered’ is another example of excuse-making for a first family whose disingenuousness reeks of what Bo and Sunny will deposit beside the White House vegetable garden.

To be bluntly honest, the President and First Lady are probably of the persuasion that, just like unwanted children should be aborted, if a dog isn’t wanted, euthanizing is something that is certainly a viable choice.

In other words, Other First Dog, Sunny, is pedigreed, therefore worthy of life.

For the homeless mongrels roaming the streets of Washington DC, the Obamas showed care and concern by donating money to help supply the local pound with the pentobarbital needed to dispose of bothersome mutts. 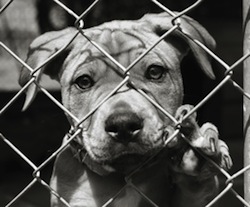