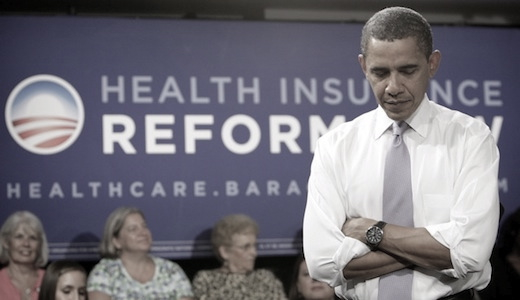 Or a direct result from Barack Insane Obama’s idiotic ObamaCare legislation. You know…the insurance that Obama doesn’t want for himself, his family, Congress, unions, or large corporate donors.

But ObamaCare is fine for the sodomites, and the idiots stupid enough to vote for the black man who has created more destruction in the black community than all the white presidents before him.

The lecherous Left knows that ObamaCare is a turd from all angles, not to mention the malodorous smell of the thing. At every turn, we find ObamaCare can’t be implemented, or there is some delay, because it simply can’t work. Daily we hear of businesses who are cutting back the hours of employees, in preparation for this nonsense, but Liberals won’t let this “elephant man” piece of landmark obscenity die a horrible death.

Why? They have too much invested in Barack “Failure is my middle name” Obama.

Sure we see the kinks in the armor ourselves, the late night talk show hosts going after Obama, the occasional Hollyweirdo, but for the most part Liberals are following their marching orders…right off the cliff.

Obama doesn’t get blamed for turning full-time jobs into part-time jobs. He’s not blamed for increasing welfare by almost 16M. Disability rolls growing, median income down, dependency on government through the roof, no jobs, and more people have quit looking for jobs than at any point in history. But the Left tells us the economy is in recovery.

Yes, and so is James Gandolfini.