Wonder how many blacks were murdered by blacks during the span of the George Zimmerman trial?

Main Stream Media won’t get this stat out — it’s up to us in New Media to do their job. 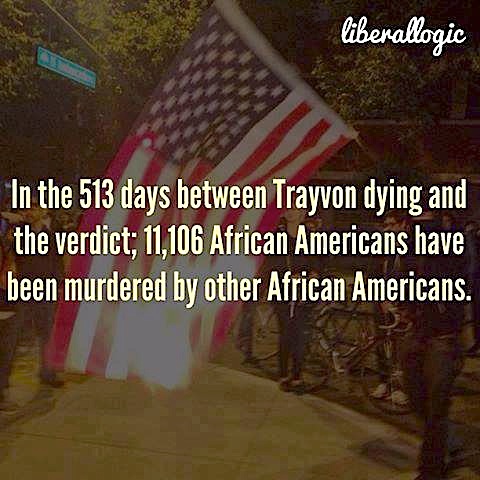 I wrote this back in April of last year:

To be exact, the shameful truth is that 93% of African-American murders are committed by other African-Americans. That is breathtakingly awful when you consider how incensed the African-American community is about the Trayvon tragedy, no matter what you believe about Zimmerman’s guilt.

Let’s do the gruesome math, not out of morbidity, but because it manifests the incredible self-centered insanity of people like Jesse Jackson and Al Sharpton.

93% of them by other African-Americans.

That’s 21.65 murdered each day by other African-Americans.

And these racebaiting culture-hustling microphone-pimps only get riled up when a “White Hispanic” kills an African-American? It’s absolutely shameful.

To update, in the 503 days between Trayvon dying, and today’s verdict, 10,865 African Americans have been murdered by other African-Americans.

I was so shocked, I had to double check my numbers.

Hmm…not gonna see any of these stats in MSM. Don’t hold your breath.