HuffPo recently posted a statement saying that McDonalds could double their wages by raising prices by only 17%. 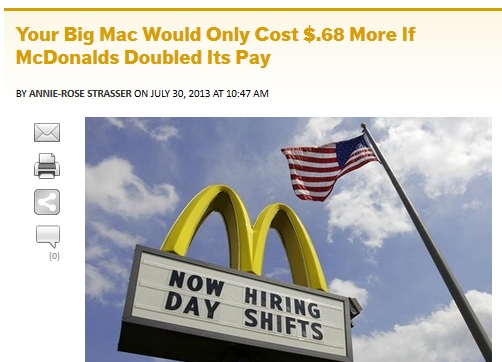 Realizing the error, they posted this retraction:

On Monday, The Huffington Post published a story entitled “Doubling McDonald’s Salaries Would Cause Your Big Mac To Cost Just 68¢ More.” HuffPost has since learned that the research used as the basis of the story contains significant errors that cast doubts on its claims. This story has replaced the one originally published in this space.

The story drew on data presented by Arnobio Morelix, an undergraduate student from The University Of Kansas who identified himself as a researcher for the school. In an interview, Morelix told the HuffPost that only 17.1 percent of McDonald’s revenue goes toward salaries and benefits, meaning that for every dollar McDonald’s earns, a little more than 17 cents goes toward the income and benefits of its employees.

However, as the Columbia Journalism Review subsequently noted, Morelix’s analysis only takes into account the payroll and employee benefits of McDonald’s company-operated stores while excluding franchise businesses.