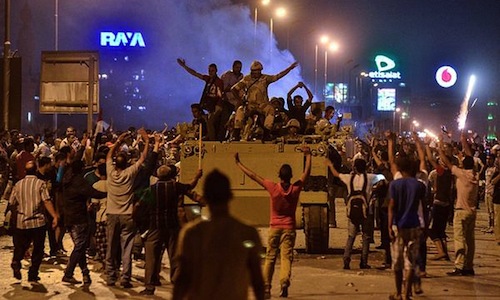 There is no way the US should cut off aid to Egypt.

The carnage in Egypt during the past week has been awful it’s the only way to describe it too many deaths on both sides. Yes its true that President Mohammed Morsi, a member of the Muslim Brotherhood, was democratically elected, but one of his first moves was to change the constitution for his own political benefit.

In the end Morsi lost the support of the vast majority of the Egyptian people. The Egyptian Army, whose interest is in maintaining the peace so they guarantee the status quo of the military bureaucracy, heeded the calls of the people and took over.

The Muslim Brotherhood is as culpable in this weeks deaths as the military, they have been attacking/killing supporters of the military and trying to ethnic cleanse the country’s Coptic Christians. And the military may be too harsh in its attacks to maintain order.

The truth is both sides are the bad guys. The real question is what is in the best interest of the United States, and its not the semi-neutral policy taken by this administration.