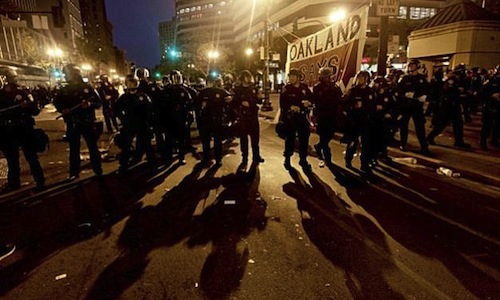 In the wake of all their money woes, many Liberal indoctrination centers (enclaves known as CITIES) looking into private (gasp) security.

When it takes a cop 45 minutes to respond to violent crime, you’d better have a backup plan in place. According to this report by CBS, incredibly slow response time is exactly what is happening in Oakland, CA:

“Gunfire has become so common on the streets of Oakland, California — that even in neighborhoods that once seemed immune to the city’s violence, residents are no longer shocked.

“It’s like, ‘Oh, another shooting,'” said Jan Hetherington, who has lived for 14 years in the Oakland neighborhood of Maxwell Park. It’s a place with glorious views across San Francisco Bay, neat houses and friendly neighbors.

“This is the most wonderful neighborhood I’ve ever lived in,” she said. Yet she acknowledged she has to bring in private security to feel safe.

And police and security failure also has been reported in Baltimore, bastion of liberalism, as reported here by Fox.

Liberalism protects so well, you get to pay for it TWICE!