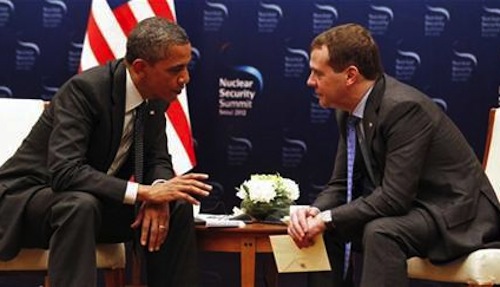 Remember when Barack Obama, aka Mr. Flexible, told Dmitry Medvedev to relay a message to Putin that after the 2012 election he’d be more “flexible“?

Since Obama made the “more flexible” promise to Russia via an open mic, he has proven he’s anything but.  In fact, he’s become even more stridently autonomous, intractable, and unable to be budged from whatever fool-headed notion he has.

Now, with an inflexible amateur at the helm, the rest of the planet waits with the U.S. in nervous anticipation to see whether Barack Obama will be stupid enough to attempt to community-organize the world by single-handedly forcing it to descend into a type of chaos that is even more deadly than the pandemonium he’s caused here at home.

On the domestic side, in an effort to implement his idea of fairness, Mr. Flexible has ignored public opinion on health care and foisted upon 300 million mostly unwilling individuals an impending “train wreck.”