An internal audit and top-secret documents now reveal that the NSA over-stepped its bounds thousands of times each year since Congress granted the agency broader powers in 2008.

The Washington Post received the documents earlier this summer from at large NSA contractor, Edward Snowden. 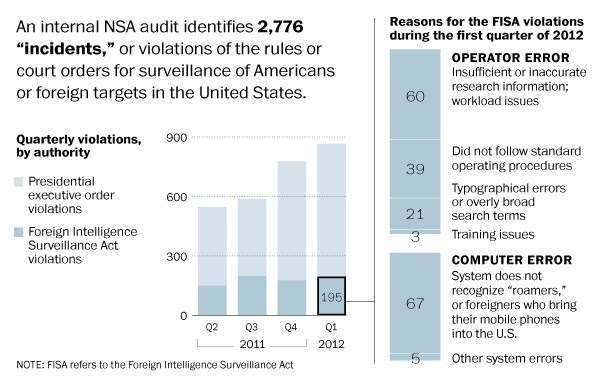 Most of the infractions involve unauthorized surveillance of Americans or foreign intelligence targets in the United States, both of which are restricted by statute and executive order. They range from significant violations of law to typographical errors that resulted in unintended interception of U.S. e-mails and telephone calls.

The documents, provided earlier this summer to The Washington Post by former NSA contractor Edward Snowden, include a level of detail and analysis that is not routinely shared with Congress or the special court that oversees surveillance. In one of the documents, agency personnel are instructed to remove details and substitute more generic language in reports to the Justice Department and the Office of the Director of National Intelligence.

In one instance, the NSA decided that it need not report the unintended surveillance of Americans. A notable example in 2008 was the interception of a “large number” of calls placed from Washington when a programming error confused the U.S. area code 202 for 20, the international dialing code for Egypt, according to a “quality assurance” review that was not distributed to the NSA’s oversight staff.

The Obama administration has not been forthcoming with either information or documents detailing the NSA detailing the scope and targets of the NSA surveillance program.

In June Deputy Attorney General James Cole described the protocols intended to constitutionally rein in the NSA and admitted, “Every now and then, there may be a mistake.”

The NSA audit obtained by The Post, dated May 2012, counted 2,776 incidents in the preceding 12 months of unauthorized collection, storage, access to or distribution of legally protected communications. Most were unintended. Many involved failures of due diligence or violations of standard operating procedure. The most serious incidents included a violation of a court order and unauthorized use of data about more than 3,000 Americans and green-card holders.

In a statement in response to questions for this article, the NSA said it attempts to identify problems “at the earliest possible moment, implement mitigation measures wherever possible, and drive the numbers down.” The government was made aware of The Post’s intention to publish the documents that accompany this article online.

While nearly 90% of the infractions are typographical errors, the other 10% include “unauthorized access to intercepted communications, the distribution of protected content and the use of automated systems without built-in safeguards to prevent unlawful surveillance.”

For more detail and all supporting documents refer to Gellman’s Washington Post article.

This Snowden release is different from the others, rather than leak a new program or information gathering system, this leak proves more than anything that the NSA is run by and staffed with humans who happen to make lots of mistakes.

While the majority of the “incidents” were accidental they are just as wrong as the deliberate violations of the 4th Amendment which seemed to be inherent in the PRISM and phone information gathering  programs revealed earlier.

The  FISA program MUST be revised. On one hand the need for intelligence is understandable in this age of worldwide Islamist terrorism, that is why I originally supported the program five years ago.

However with the revelations of over reaching programs and unintentional screw-ups it has become obvious that the FISA program is a “monster” that cannot be controlled. Neither the courts nor the Congress who we trust for oversight can do its job because they only receive the information they are given.

A famous Ben Franklin quote has proven to be correct once again, “He who would trade liberty for some temporary security, deserves neither liberty nor security.”