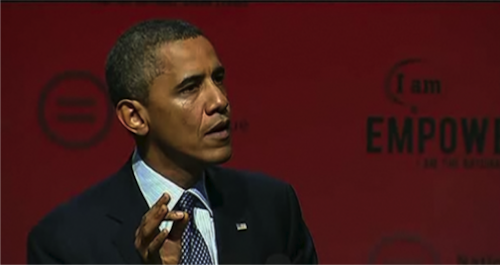 Obama has more excuses than he has scandals concerning the myriad of problems in the black community, including the bad behavior of black kids in schools.

In his latest “I hate imperialist white America” action, Obama wants to regulate schools’ disciplinary actions so that penalties are more fair.

In other words, so what black kids behave worse in overwhelming numbers — some other ethnic group needs to pay. Think of it as “redistribution” of consequences.

The President’s July 26 executive order established a government panel to promote “a positive school climate that does not rely on methods that result in disparate use of disciplinary tools.”

In typical Obama fashion he has established a panel to solve unsolvable problems that people on the panel created.

Essentially Obama is admitting that:

So the dirty little secret in “education” is that black kids are disciplined at higher rates than non-blacks.  Let’s run with this for a moment.

We have a school system RUN BY LIBERALS who are the biggest bleeding hearts on the planet for all things black.

Are these Liberals disciplining black kids, dare I say TARGETING these kids?

What Obama’s “Initiative on Educational Excellence” seems to be leaving out is, MOST of these teachers teaching black kids in schools with heavy black populations are…BLA-ACK!

But don’t expect black teachers to sound the warning bell on how difficult their job has become because of scourge of Liberalism.

No, there is too much money to be had in keeping their mouths shut and just keeping that conveyor belt of ignorance pumping dumb black kids out of the schools…right into prison.