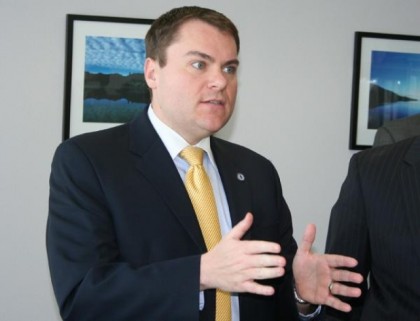 DeMaio made the statement in response to allegations in a “Voice of Orange County” article that he spent more time taming his member than he did council-ing members.

Former city council member/current Democratic State Senator Ben Hueso claims that in 2009, everyone from city officials to the media knew that Mr. DeMaio, a Republican, wasn’t in the restroom because of an overactive bladder or a need to readjust his boxer briefs.

Even though Mr. DeMaio’s face is void of pimples, it should be duly noted that 1) he does not, I repeat, does not wear glasses, so he isn’t even close to being blind; and 2) his palms are hair-free.

Nonetheless, appalled at Hueso’s accusations, and despite the supportive evidence of good eyesight and hairless palms, Mr. DeMaio chose to submit himself to a polygraph test to prove that his trips to the restroom had nothing to do with self-pleasuring.

On behalf of DeMaio, attorney Robert Ottilie sent a letter to the “Voice of Orange County” demanding the publication issue a correction of the article accusing Mr. DeMaio of frequenting the restroom to relieve himself in an inappropriate manner.

In politics, you see people make accusations all the time. And you know, I’ve had people criticize me before and I usually let it roll off my back. But this one crosses the line. It’s so gross. It’s so false, that I have to speak out. I have to present the truth.

DeMaio plans to run against newly-elected Democratic Rep. Scott Peters in San Diego’s 52nd Congressional District, and feels that a fabricated story that was put to rest back in 2009 was “shopped around” during a heated mayoral race with disgraced Mayor Bob ‘Filthy’ Filner in October 2012.

“Local papers in San Diego saw it for being a lie and dismissed it,” DeMaio said, “and now, conveniently the timing, of bringing it out right as a new mayoral race starts. It’s very clear what this is.”

In response to Hueso pulling Mr. Young into the controversy, Tony issued a statement today saying:

“During my tenure with the city I never witnessed Mr. DeMaio do anything inappropriate as a member of the City Council.”

That’s why, if Carl DeMaio is the masturbatory giant Ben Hueso claims he is, when Democrats go to vote, Carl’s extracurricular trips to the john could handily deliver the Republican mayoral hopeful a respectable victory.