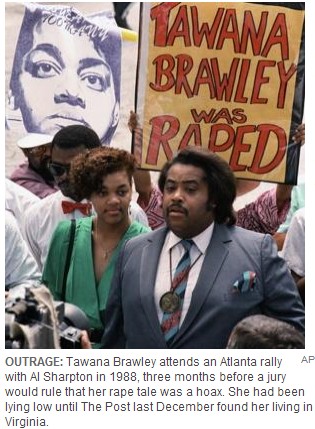 What’s funny about the outcome when race-pimps help is they get off scott free.

Sharpton stoked the flames of racism, but Tawana Brawley is left holding the bag of excrement. With the help of Sharpton, what should have been a local story of nonsense, was raised to nationwide level back in 1987.

According to the New York Post, Brawley has only paid about $3700 by Steven Pagones, the former county prosecutor who Brawley and Sharpton claimed raped Brawley, then 15. Sharpton was quick to jump on the allegations, before learning that Brawley was trying to avoid punishment for staying out late. Hey that’s a good reason to put a couple of white guys in prison.

Pagones sued Brawley for defamation and won a $185,000 judgment, which has grown to more than $400,000 with interest. Something tells me that Sharpton won’t be chipping in to help Tawana pay off the debt.