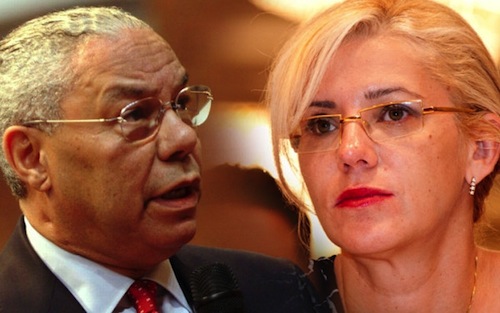 In 2008 and then again in 2012, after retired four-star General Colin Powell endorsed and then voted for Barack Obama, the former Secretary of State’s sanity was already in question.

At least now, after having his email account hacked by high-level security-breacher Guccifer, Colin Powell’s besmirching of the Republican Party’s “shift to the right” and “identity crisis” finally makes sense.

It seems that for years the mannerly and always professional Colin Powell has been cyber-comporting with a 46-year-old Romanian European Parliament member, Social Democrat, and past spokesperson for Romanian president Ion Iliescu named Corina Creţu.

So it’s safe to say that Colin Powell was probably the one in the throes of an “identity crisis.”

As vice chair of the Progressive Alliance of Socialists and Democrats in the European Parliament, Corina Creţu, who once called Powell the “love of her life,” had, on occasion, spoken out against cruelty to women worldwide. Yet thanks to her progressive mindset, seducing in hopes of ‘sharing’ someone else’s husband must not be a problem for her.