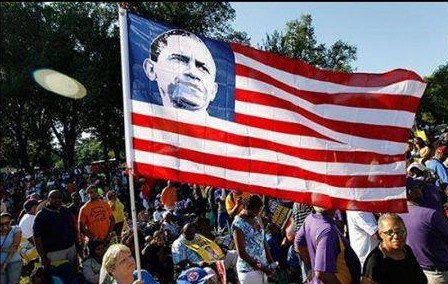 In  a joint resolution dated June 22, 1942, the US Congress set out very specific criteria outlining how the US Flag should be treated, displayed, revered and even hoisted.

One of those specifications says that the US Flag “should never have anything placed on it.”

Apparently, Obama acolytes did not get that message because they showed up in Washington DC to honor the late Martin Luther King Jr. carrying flags with Barack Obama’s face on it.

The question is:  Where are our elected representatives?

If ever there was a reason for Congress to step forward and address an issue – the desecration of the American flag should be one of them.

Moreover, President Obama, the man who thought there were “57 states”  should demand that the flag with his face replacing the stars, be immediately destroyed.