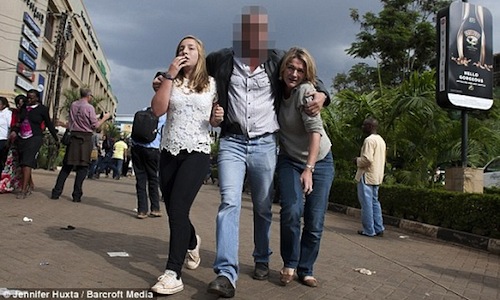 The crisis is now over, and from the aftermath has emerged an armed hero, courageous and effective enough to give poor Piers Morgan nightmares.

A former marine emerged as a hero of the Nairobi siege yesterday after he was credited with saving up to 100 lives.

The ex soldier was having coffee at the Westgate mall when it was attacked by Islamists on Saturday.

With a gun tucked into his waistband, he was pictured helping two women from the complex.
His story emerged as sporadic gunfire continued to ring out from inside the mall early today as Kenyan security forces battled Al Qaeda-linked terrorists into a fourth day.

Despite Kenyan police assurances that they had taken control of the building, a security expert with contacts inside the mall said at least 10 hostages were still being held by a band of attackers, possibly as many as 13.

The former soldier is said to have returned to the building on a dozen occasions, despite intense gunfire.

A friend in Nairobi said: ‘What he did was so heroic. He was having coffee with friends when it happened.

‘He went back in 12 times and saved 100 people. Imagine going back in when you knew what was going on inside.’

Thank God for this brave Royal Marine: packing heat, well-trained, and willing to sacrifice for the lives of others.

More lives would have been lost if this one Royal Marine had not been willing and packing. I’m anxious to hear Obama, Pelosi, Feinstein and crew praise the valiant deeds of the armed citizen. Still waiting.