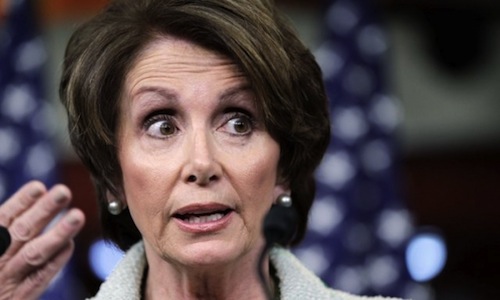 Nancy Pelosi should go back to her plastic surgeon and ask him to loosen the skin ponytail on the top of her head, because it’s impacting her already-compromised ability to think straight.

Recently, Mrs. Pelosi was shilling for the left on Obama debate-savior Candy Crowley’s “State of the Union” show on CNN. Ms. ‘I saved Obama’ Crowley felt moved to read a letter to Pelosi signed by James Hoffa Jr., of Teamster hoodlum fame.

The letter from Mr. Hoffa the Younger, General President of the International Brotherhood of Teamsters, rightly describes Obamacare’s impact as a way to “destroy the foundation of the 40-hour work week.”

This is the same Jimmy Hoffa Jr. who, before the Affordable Care Act became law, ardently lobbied on its behalf. Jimmy may still not know where his father is buried, but what he has figured out is this:

The law creates an incentive for employers to keep employees’ work hours below 30 hours a week. The impact is two-fold: fewer hours means less pay while also losing our current health benefits.