This video is amazing: a camera strapped to the back of an eagle show an “eagle’s eye view” in flight!

It is said the eagle was used as a national emblem because, at one of the first battles of the Revolution (which occurred early in the morning) the noise of the struggle awoke the sleeping eagles on the heights and they flew from their nests and circled about over the heads of the fighting men, all the while giving vent to their raucous cries.

“They are shrieking for Freedom,” said the patriots.

Thus the eagle, full of the boundless spirit of freedom, living above the valleys, strong and powerful in his might, has become the national emblem of a country that offers freedom in word and thought and an opportunity for a full and free expansion into the boundless space of the future.

Interesting fact: “all eagles are renowned for their excellent eyesight, and the bald eagle is no exception. They have two foveae or centers of focus, that allow the birds to see both forward and to the side at the same time.

Bald eagles are capable of seeing fish in the water from several hundred feet above, while soaring, gliding or in flapping flight. This is quite an extraordinary feat, since most fish are counter-shaded, meaning they are darker on top and thus harder to see from above.”

And now, thanks to Srachi’s video — we can see, for once, from the majestic eagle’s perspective! Enjoy! 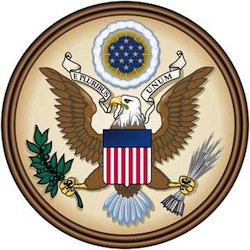