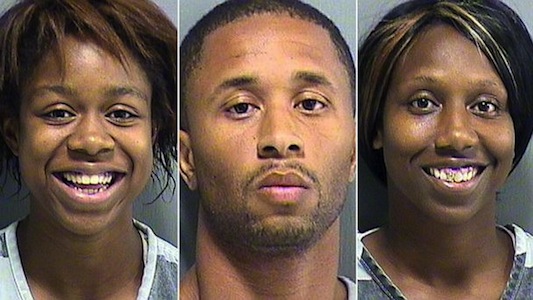 In American society, family outings are civilized, morally-based and typically do not include criminality.

In fact, my family activities range from visiting places of interest, having barbecues in the park, or simply playing board games at a relative’s home. However, there are families who evidently do not adhere to the basic, good-natured, principles that govern the rest of us. Consequently, their societal detachment continuously yields mind-boggling stories such as the following.

According to ABC News, a family of heathens was arrested for stealing items in two separate burglaries from a nearby church. The family then had yard sales to peddle the merchandise, which included electronics, generators, music equipment, and water coolers. Undeniably, this family of three is the” Un-Holy Trinity.”

During the burglaries, the father (Paul Mikell) would wait inside the getaway vehicle, while the mother (Clariese Jones) and their daughter (Olivia Jones) robbed the church.

Acting on an anonymous tip, which assumingly came from a person who knew that hell was hot, the police arrived at the heathen’s home (a few streets from the church) and immediately noticed several speakers, a CD player, and other electronics on the front lawn.

The police stated that the daughter (Olivia Jones) was once jailed on unrelated charges stemming from a traffic violation. Her incarceration occurred between the two church burglary incidents, and  her mother, father, along with another heathen, identified only as Beaux, sold several of the stolen items from the first burglary for Olivia’s bail.

Unsurprisingly, after Olivia was released from jail, the family resumed their favorite family pastime and burglarized the church again.

Currently, this treacherous trio is in jail for simple burglary of a religious building.

Even so, the mom and daughter still had the audacity to smile for their mug shot photos. Perhaps they’re smiling because the joke is on us.

Yup, the taxpayers will now be robbed to pay for this family’s jail stay.

Maybe, just maybe, this entire situation could have been prevented had this family pondered the popular phrase, “What Would Jesus Do” instead of “What would Lucifer Do.”