Democrats tell Americans over and over that THEY are the party with a heart, they are the party that really cares about the people.Yet during the second portion of Thursday’s House Oversight and Government Reform Benghazi hearing, most of the Dems on the Committee walked out prior to testimony from the families of the victims. 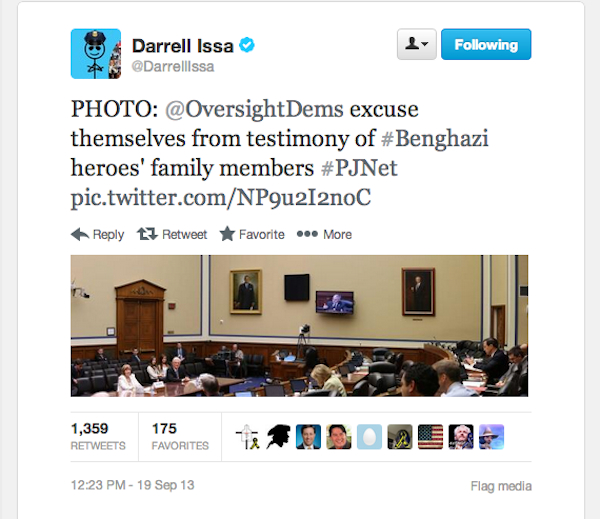 Democrats displayed the pinnacle of callousness when they refused to hear the testimony of Patricia Smith, Sean Smith’s mother, and Charlie Woods, Ty Woods father.

Here is the rogues gallery of despicable Dems who walked out:

Please note that I have included links to their websites as well as Twitter accounts — please email, tweet, and advise these congressmen exactly how you feel about them walking out on the testimony of grieving parents of brutally slain American heroes!

On September 11, 2012, the US installment in Benghazi was over-run by Islamist terrorists in a premeditated attack. Assets were not deployed to help. Four brave Americans, including a sitting US Ambassador, were murdered. Subsequently, Obama, the White House, Sec. Clinton, Susan Rice and the State Department lied about the attack.

Those suborners of perjury mounted a united front and were shamefully backed by most Democrats and the Main Stream Media in propagating the lie that the attack was an organic outgrowth of reaction to a six-month-old, obscure, anti-Mohammed Youtube video.

Shame on Obama! Shame on Hillary! And shame on every single journalist and legislator who has been implicit in the lies and obfuscation.

The horror of the Benghazi attack and murders far outweighs Watergate, and yet there are no decent Woodwards nor Bernsteins to tenaciously follow this story and not let go ’till justice is done.