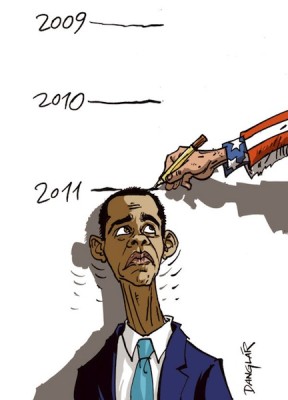 For the last five years, every harebrained idea our neophyte president has come up with has been presented with his incessant campaign-style nagging along with threats of racism accusations if rejected.

Both of which have helped clear the way for the ridiculous things he’s offered up as serious policy proposals.

As a result, America now has healthcare reform we don’t want, 30 million illegal aliens boldly emerging from the shadows, and Americans feeling like foreigners in their own country.

The reason we’re in this position is that Barack Obama has fancied himself a president, a doctor, and an overseer of illegal immigrants, as well as economist and shovel-ready job creator. With an emphasis on birth control and abortion, he’s dabbled in gynecology, feminism and LGBT studies.

He’s been a theologian, a firearms expert, and a child-rearing authority, too.

Somehow, with fairy dust and sound effects, Barack Obama has managed to convince the nation that he’s a specialist on all subjects.  What turned out to be true is that he is clearly master of none. Unfortunately for a country that has granted him carte blanche, rather than Obama stopping the “rising of the oceans,” America is drowning in his ineptitude.

Now, after gaying-up the armed forces and supporting various and sundry Middle East uprisings, the president is hoping to exercise his self-perceived military prowess by lobbing bombs and missiles in the direction of a nation whose gassing of 1,400 people is apparently more offensive to him than a madman threatening to annihilate the entire nation of Israel.

In other words, Barack Obama, the biggest enemy of the Second Amendment, is hoping to muster public support for bombing Syria from the very country he’s spent the last five years trying desperately to disarm.

Inconsistencies aside, the problem is that if Obama’s latest warfare project turns out anything like the other projects he’s already attempted, there’s a chance that the outcome could be so catastrophic that many of us won’t need to worry about whether we’re armed or disarmed. With Obama at the helm and Russia joining forces with China and Iran, the prospects for America’s future grow gloomier by the day.

This time around, while the President pretends to be General George Patton and prepares to punish the Syrian government for the use of chemical weapons that no one is really 100% sure they used, the applause has died down and the accolades have all but disappeared.

As a result, the Nobel Peace Prize winner is probably pretty confused, especially after five years of seeing a good portion of the nation jumping to their feet and clapping wildly over any absurd thing he said or did.

Obama compounded the situation recently when, referring to the wars in Iraq and Afghanistan, he said “it is important to get out of the habit of letting the president stretch the boundaries of his authority.”

As a result, after disproportionately “letting the president stretch the boundaries of his authority,” Congress, public opinion, and every US ally on the planet are taking Obama’s advice and placing barriers in front of him that should have been erected years ago. Thus, Barack Obama’s ability to charm the nation, his party, and the world is ebbing away.

Sadly for him, the icy response the president is getting from those who once welcomed him warmly is causing him an unprecedented level of “shrinkage.” Nonetheless, unable to take no for an answer, Obama will once again drag out his trusty Teleprompter and attempt to twist the world’s arm by eloquently razzle-dazzling everyone with the patented lofty but completely hollow rhetoric that has ferried America into our current mess, both domestically and internationally.

Amazingly, thanks to all the hype and failed polices and dithering Obama has inflicted on both the nation and the world, at the moment Syrian president/brutal dictator Bashar al-Assad actually seems to have more credibility than the incredible shrinking Barack al-Obama has ever had.