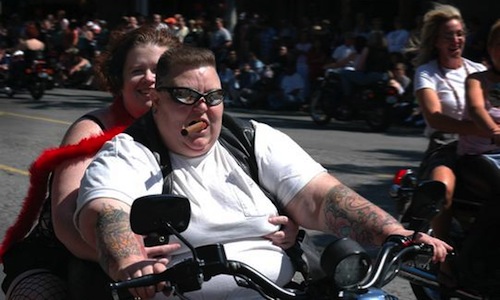 I know that the burning question on your minds…and I say this with exactly NO INPUT from you…is that you want to know WHY LESBIANS ARE FAT!

Don’t deny it, because I will simply ignore your protestations. We have all wondered for YEARS why Lesbians are so fat, and we wondered when Congress would get around to funding a study to answer this question.

Why are 75 percent of Lesbians so FAT! It just makes no sense. Is being fat part of being a Lesbian. OR is it the other way around.

It certainly makes them easier to spot, right?

The good news is that your government heard you loud and clear!

Which is why, despite sequestration, the National Institute of Health awarded $682,873 to Brigham and Women’s Hospital on July 17 to study why 75 percent of lesbians are obese. That brings the total amount outlaid for this project up to $2.2 million.

Money well spent. Because America’s Lesbians are at risk…of backlash from Michelle Obama!

I suggest they study why Obama is so obsessed with Lesbians. He had Hillary Clinton, Janet Napolitano directly on his staff…not in that “Bill Clinton” way of course.

THEN Obama appoints two Lesbians to the Supreme Court. The man is OBSESSED! Perhaps he was a Lesbian in another life? I do know that I would pay $2M to know if this is related to Obama being raised by Tranny Nanny as a child.

One theory as to why Obama surrounds himself with Lesbians is, he wants to know how to ACT LIKE A MAN!

But I digress. The point is that the Lesbian lobby has managed to hold on to their study to get to the bottom of their obesity epidemic. I could have saved America $2M by telling Lesbians to get off their fat asses and hit the gym. Send checks to TBS, POB 2036, St. Louis, MO 63158.