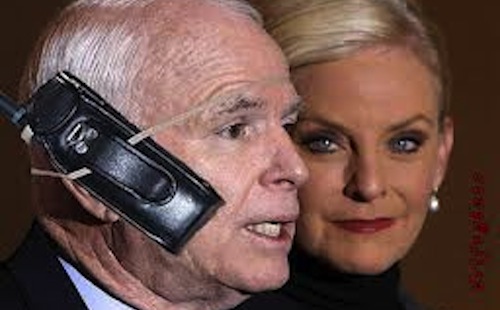 John McCain has become more than an embarrassment, and as one of my friends said recently, “I voted for Sarah Palin, and McCain benefitted.”

McCain’s recent admission that he “F’g hate Ted Cruz” is symptomatic of what’s wrong with Republicans.

McCain wants to be liked so much, that he will turn on the very people whom he should be supporting, thereby siding with those he knows to be destructive…the Liberals.

And McCain is as abnormal as they come. A man who should have retired 20 years ago with his rich “trophy wife” is consumed with power. McCain is the punch-drunk boxer who doesn’t know when to throw in the towel. He doesn’t speak for Republicans and certainly not Conservatives, as he curries favor with the Left.

One of my friends speculated that McCain’s need for affirmation came from his time as a POW. He learned to “get along.” To appease, and undoubtedly develop Stockholm Syndrome as he is certainly friendly with the enemy. So much so, that McCain won’t admit that ObamaCare is bad for America…period.

Conservative Americans are tired of appeasers — people without resolve to stand up for those they claim to represent. Twice this weak, Democrats demeaned the Tea Party, accusing us of highjacking the Republican Party. They got it wrong.

The Republicans hijacked the Tea Party LONG ago, and we are just taking it back.

McCain and others like him will find soon that there is a new Republican Party, and it will look a lot like the party of Lincoln.