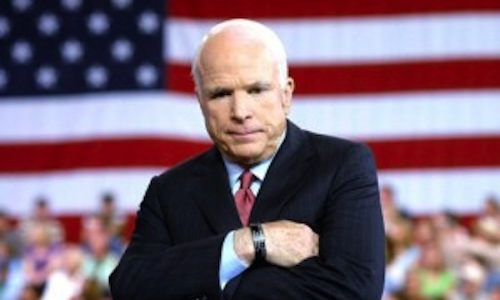 “We fought as hard as we could in a fair and honest manner and we lost.”

Said war-hero, McCain. He then continued,

“One of the reasons was because we were in the minority, and in democracies, almost always the majority governs and passes legislation,”

For 26 years you’ve been sent to Washington (a good case for term-limits) with a mandate from the majority of those in your State; not a majority of Americans, to represent your constituents (but, hey… don’t let that whole “State elections” thing get in the way).

For the sake of argument let’s take your logic to its ultimate conclusion. Since America is a “Democracy” as you so kindly pointed out, and since elections have unbending consequences, then we should soon see you coming out in support of the following:

Open borders. Drone strikes on US Citizens. Gay marriage. Excessive taxation. Blanket amnesty for illegals. Gun control. Diminished privacy rights. Negotiating with terrorists. Furnishing weapons to drug cartels. The handling of Benghazi. Abortion (including partial-birth… don’t be shy). And you should absolutely, above all else LOVE you some Obamacare! After all, this is a “Democracy” and Conservatives lost the election!

Elections DO have consequences, Senator. As a matter of fact, weak nominees have consequences. But I digress. This will probably come as a shock to you, so please have a seat. Conservatives were elected all over America in the last election! I know you’re living in your little bubble inside a Big-Government, but Obama is not the only politician with a voice in Washington. There are lots of them and a few of them actually have the interest of those they represent in mind when they carry on the business of politics. Are you still listening? Apparently not.

It’s your job as an elected Representative from the great State of Arizona to fight for her Conservative base. It is not your job to kowtow to a Liberal agenda.

Here’s a little advice. I know you’re a giant among men and all, and I realize you have the experience of many years but I feel I have something to offer. Now, this is a little complicated, so you may want to write this down:

When someone is agreeing with you, (here’s good part)… let them! I know that sounds like crazy-talk, but last I heard you and the rest of your RNC buddies disagreed with Obamacare and vowed to see it gone. So wouldn’t it be logical that you might try and support the guys that maintain your views?

Unless, of course you’re not being honest with your constituents about what you believe.

Nah! THAT would be crazy-talk!