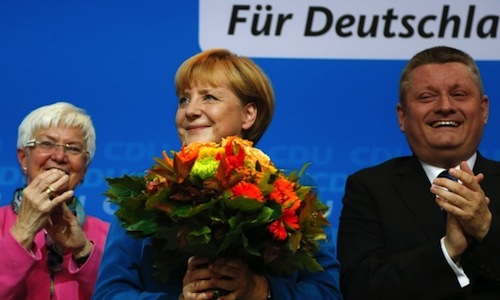 Germany’s Green Party unveiled a plan patterned after Michelle Obama’s “meatless Monday,” and that turned out to be bad news for their election hopes.

Laughing at the Greens’ message, Merkel herself came out on the campaign trail in favor of Germans eating meat whenever they damn well pleased, and her party surged to the largest victory margin since Helmut Kohl’s win right after reunification with the formerly-Communist East more than twenty years ago.

Veggie Day wasn’t the only idea ridiculed, as “meatless Monday” from Michelle Obama was met with mockery when the US Department of Agriculture floated to its employees in an interoffice memo last year. The USDA proposal, which was claimed afterward to be “unofficial” and to have lacked clearance.

It should be noted that the German Green Party was founded in 1979 by a wide variety of anti-Western weirdos, including Communists and ex-Nazis, and the claim that Adolf Hitler was a devout vegetarian.

Ironically, because Merkel’s party might end up a couple of seats short of a majority in the Bundestag, they may have to form a coalition government with the Greens, who came in fourth in the election. Presumably, though, as chancellor, Merkel will be picking the menu when they have dinner together. Bratwurst, anyone?

Written by Stephen Foulard with contribution from Kevin Jackson