Who knew that war was so cool? The hippies of the 60’s thought San Francisco and flowers in your hair were groovy. 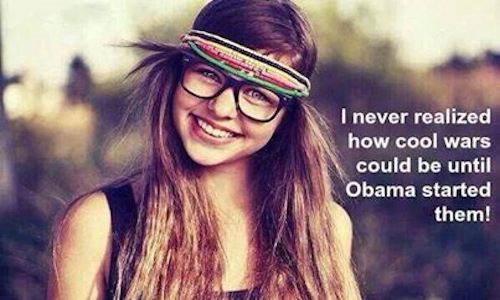 Ooh but the Lefties were furious when the coalition rained down Shock and Awe on Saddam Hussein and his henchmen in that dangerous sandbox.

“ Shock and awe” was repeated endlessly. In the week the war began, more than 600 news reports around the world referred to “shock and awe,” according to a count by the Washington Post.

Military strategists from Sun Tzu to Clausewitz have understood the value of destroying the enemy’s will to resist, but Shock and Awe—introduced by a 1996 study aimed at Pentagon insiders—took it to higher levels. Shock and Awe meant an attack so massive and sudden that the enemy would be stunned, confused, overwhelmed, and paralyzed.

Harlan K. Ullman, principal architect of the concept, explained to the Long Island Newsday in February, “What we want to do is to create in the minds of the Iraqi leadership, and their soldiers, this Shock and Awe, so they are intimidated, made to feel so impotent, so helpless, that they have no choice but to do what we want them to do, so the smartest thing is to say, ‘This is hopeless. We quit.’ ”

The Department of Defense did not officially or explicitly endorse Shock and Awe, but traces of it could be discerned in statements by top leaders.

For example, Gen. Tommy R. Franks, commander of US Central Command, said at a press briefing in Qatar March 22, “This will be a campaign unlike any other in history, a campaign characterized by shock, by surprise, by flexibility, by the employment of precise munitions on a scale never before seen, and by the application of overwhelming force.”

Franks said, “Coalition airmen [will] deliver decisive precision shock, such as you witnessed beginning last night.” He said that the attack was carried out by “shock air forces.”

But now, a decade later, under the tyrannical rule of the Community-Organizer-in-Chief, war is en vogue.

College students and 20-somethings can’t name the Vice President  and look baffled if you ask “Who’s the leader of the House?” or “Who is the Secretary of State?”

All they know is Barack is black, gives them free phones, and whatever he does is cooler than cool.