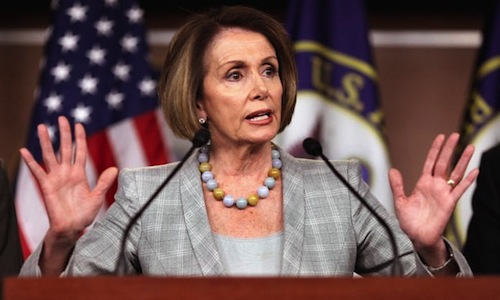 Nancy “Women dying on the floor” Pelosi, aka Mimi to her grandchildren, recently had a conversation with her five-year-old grandson that was chock full of Pelosi profundities.

This time it was about the unrest in Syria. According to the House Minority Leader, as she was leaving San Francisco, probably en route to Washington DC to inflict more mayhem, her wide-eyed kindergartener grandson said to her, “Mimi, war with Syria, are you yes war with Syria, no war with Syria?”

In her usual incoherent manner, Granny Pelosi shared that she answered the little rug rat in the following way: “We’re not talking about war; we’re talking about action. Yes war with Syria, no with war in Syria.”

Huh? If the kid wasn’t confused before, “no boots on the ground” word play must have really jumbled his pint-sized brain.

Then, because liberals are the inventors of moral relativism, as if it mattered, Nancy asked the tyke, “Well, what do you think?”

The grandson, who shall remain nameless, said, “I think…