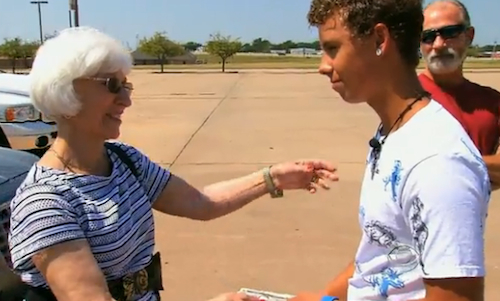 My father was a scoundrel, and that is why this story hits me hard.

A man robbed 78-year-old Tona Herndon while she was laying flowers at the grave of her recently buried husband of 60 years. The cops found out who did it, and posted his mugshot and the photo was recognized by 15-year-old Christian Lunsford — who recognized his father.

Now this is where the message gets muddled.

The teen reached out to Mrs. Herndon, and expressed regret to her for what his father had done. I know that sounds like the right thing to do, however the kid did NOTHING.

We have become conditioned to feel guilt, where there is no guilt, and this is why things like “slavery” and “civil rights” remain as fresh as they were in the 1860’s and 1960’s.

Lunsford’s father had given him $25o, and he didn’t know where the funds came from. He wanted to give the money back to the Mrs. Herndon, and I agree with that. But to apologize for what his FATHER did is ridiculous.

Christian could certainly empathize for her situation, regardless of who committed the crime, and yes, there is a difference. But we have been conditioned to act as if by being related to a situation, we are “the situation.”

Apologizing implies that Christian did something wrong, and he most certainly did not.