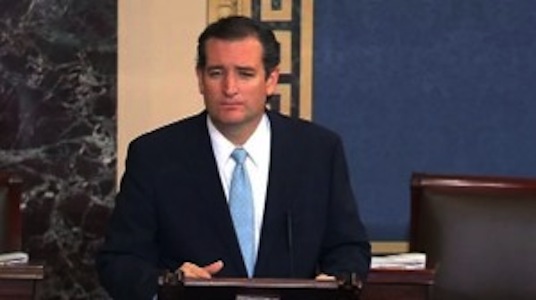 I had a dream. I’m lying in a field of daisies, the sun high as wispy-white clouds drift lightly in the pale blue sky, and a tender breeze blows across my balding pate.

In the distance, just over the hilltop I hear a sound… it’s a beautiful noise. It started in low… then it started to grow.

As I lie listening in the downy field, the words creep into my spirit until I can no longer contain my emotion! I arise and leap for joy, crying out as I spring through the air, “FREEDOM!” I declare with all that’s within me, “FREEEEDOOOOMMM!!!”

And then I awoke… To the harsh reality that the phrase best describing Washington is, “It is what it is”.

As I read the headlines all across social media and Conservative media, and as I look at the man, Senator Ted Cruz filibustering at the podium for hours on end defending the American people from an out-of-control Government, I marvel at his devotion and I’m amazed at his steadfastness.

Unfortunately, I’m equally ashamed. Ashamed at how few of our elected officials actually give a damn about the reasons they were elected and the people they were chosen to represent.

For what it’s worth, there’s probably a coat-closet crammed with a handful of true Conservative representatives in DC longing for the opportunity to come out of the closet. But either power, money, or the threat of discovery keeps them hanging on the rack for fear the gravy train will leave the station without them. But, alas… the table is set and there were no invitations sent to the unbelievers.

Enter the anarchists. Harry Reid openly decried the Tea Party as anarchists. For those with a Government education, here’s the definition:

:a situation of confusion and wild behavior in which the people in a country, group, organization, etc., are not controlled by rules or laws (Merriam Webster)

One sure way to know you’re dealing with a Washington Progressive is to see if they describe themselves while attempting to illustrate their opposition (in the words of the sage, Pee Wee Herman, “I know you are, but what am I?”) The Democrat party, by very definition deserves the label of anarchist.

Yet, Harry Reid deigns to call those who long for a return to Constitutional law and individual freedom “anarchists”. And all for the sake of propping up an overreaching President, an out of control Congress and a Constitution-busting Supreme Court.

Over the past few months, Ted Cruz and Mike Lee have been the proverbial pea under the Establishment politicians’ mattress. I’d like to think the only adversely-affected parties leaned strongly to the left side of the political aisle, but opposition from their own party has been overwhelming.

Now Ted Cruz is not only upsetting the apple cart, he’s run a backhoe through the orchard. And if you think the old-guard will just go quietly into the night, you would be dreadfully wrong. If the outcry of public support is great enough, you can bet the tone will be measured from the RNC. But the behind-the-scenes effort to discredit the rise of the new-guard will have a renewed strength and a laser-like focus on the object of their discontent.

In the end, these voices for freedom will either be buried under a mountain of trumped-up charges, or will become humbled, reluctant followers of the Republican elite. And the RNC will lead us into marginal defeat in 2014 and on to 2016 for another unelectable moderate Presidential nominee.

That’s where WE come in.

The voice of the American people has always mattered.

Ronald Reagan pointed out that ours is the only Constitution that begins, “We, the people”. We, the people… the collective; constructed of individuals having the desire and the will to fight for the rights of the individual. The right to stand or to fall on their own merit.

Like family, those American originals, our Founding Fathers, banded together to fight the British and once for all secure our independence. If we are to win the future for a Constitutional America, we will need to steel our resolve, join together as one voice and support those who dare to support our Constitutional rights.

If we fail to repeatedly and consistently make our voices heard, people like Ted Cruz and Mike Lee will fade into history. And so will America.