While most of the members of the US Senate are enjoying the waning days of lazy, summer recess, Senator Rand Paul was busy doing pro-bono eye surgeries.

It seems the Kentucky senator really believes in the work ethic and giving back.

In order to maintain his license and keep his surgical skills “honed,” Dr. Paul performed cataract and other eye surgeries during the August recess. Breanna Edwards of Politico writes:

“Because of Senate rules [Paul] wasn’t able to keep his practice for profit but … to keep his skills honed and well as to be able to continue to practice, the only way he’s able to do that is if he does it as pro bono work,” Paul’s communication director, Moira Bagley, told POLITICO. “So there are various eye clinics around the state that will donate their facilities, and their nurses, and their follow-up appointments, their equipment for Dr. Paul to come and perform surgeries on pre-screened candidates.” According to Bagley, the senator views it as a way to give back to Kentucky and tries to do the pro bono surgeries about four or five times each year on about four or five patients. “Most of these surgeries are for cataracts, and these are people that don’t have insurance, that are low-income cases. … I’d say a lot of them are elderly but he’s been doing this since he came to Congress as a way to continue to practice and to … give back to the state,” she said, adding that Paul has done surgeries from Pikeville to Paducah and places in between.

In fact, Senator Paul tweeted this picture and tweet on Wednesday: 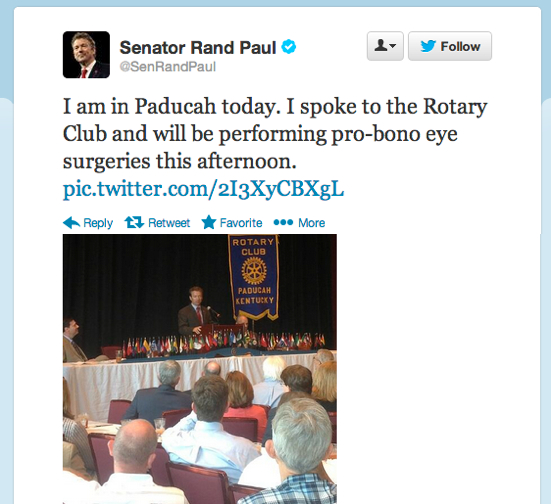 How refreshing to learn of a public servant who actually serves the public — his old Kentucky home state must be very proud indeed.