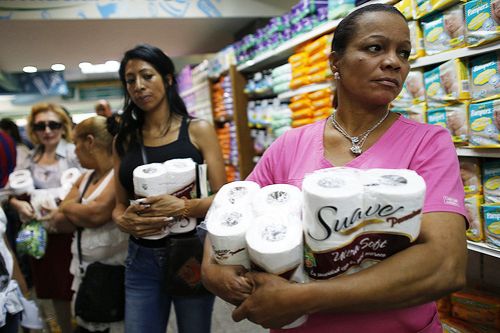 In a move that makes Hugo Chavez-loving socialist Barack Obama proud, the Venezuelan government has nationalized the country’s supply of toilet paper.

The slogan “The personal is the political” has been lowered to a whole new level. I say, “Sheryl Crow for president of Venezuela!” She was certainly ahead of her time, when it comes to ONE WIPE ONE SHEET.

Reuters reported Friday, September 20, that the government of Chavez’s hand-picked successor, President Nicolas Maduro, is taking “temporary” control of a Caracas factory that makes toilet paper, sanitary napkins, and disposable diapers in order, in order to avoid shortages of the sort that had embarrassed the regime a few months ago. Can’t have people acting like Occupy Wall Street liberals in America and “dropping trow” wherever the mood hits.

Critics of the socialist state point to onerous currency exchange controls for the inability of such businesses to import raw materials, while Maduro’s supporters applaud the stifling regulations as needed against unscrupulous profiteers. Only in socialism can someone profiteer on TOILET PAPER, and yes for you feminists out there…SANITARY NAPKINS!

Liberals are very keen on having the government take up the supposed slack when the private sector fails to meet a real or perceived need…like CONDOMS. However they would do well to turn to the wisdom of the late University of Chicago economist Milton Friedman, who warned, “the government solution to a problem is usually as bad as the problem.”

There is good news for the Venezuelans, and that is at least Obama is not threatening to BOMB THEM! Actually the good news {clears throat} is that access to the factory’s output will be under the watchful eye of the country’s National Guard.

“If you put the government in charge of the Sahara Desert, in five years, there’ll be a shortage of sand.” – M. Friedman

I would imagine a toilet paper shortage in the U.S. might have Joe Biden remind us during his 2016 run at the White House, “Bin Laden is dead, but Kimberly Clark is alive!”

Who knows what could happen from there, as Barack Obama enlists the support of George Clinton of the Parliament-Funkadelics to do PSAs to assure us Americans that there is plenty of toilet paper:

We do know that Obama would make sure that the regime-friendly newspapers get their fair share of paper. Thankfully there would be no change in how conservatives view the content. We can only hope that rags like the NY Times are a bit more soft and absorbent.

Written by Stephen Foulard, with input from Kevin Jackson