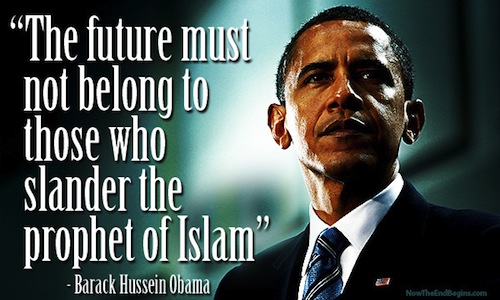 20 Quotes By Barack Obama About Islam and Mohammed

#3  “We will convey our deep appreciation for the Islamic faith, which has done so much over the centuries to shape the world — including in my own country.”

#4 “As a student of history, I also know civilization’s debt to Islam.”

#5  “Islam has a proud tradition of tolerance.”

#6 “Islam has always been part of America”

#7  “we will encourage more Americans to study in Muslim communities”

#8 “These rituals remind us of the principles that we hold in common, and Islam’s role in advancing justice, progress, tolerance, and the dignity of all human beings.”

#9  “America and Islam are not exclusive and need not be in competition. Instead, they overlap, and share common principles of justice and progress, tolerance and the dignity of all human beings.”