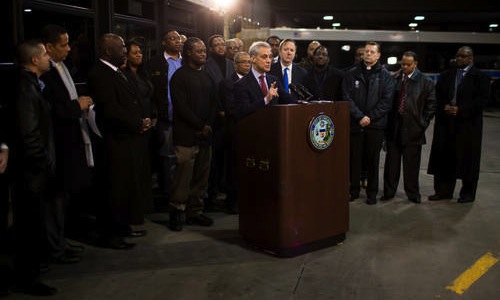 I know you’ve been told there is a lovefest by blacks for all things Democrat. Well it’s not true.

I know, I know…the lamestream media says differently. But they are liars, pure and simple.

Democrats are TOLERATED by blacks, because they feel that the Republicans don’t to listen. And that’s true.

It’s not all the Republicans’ fault, because black Liberals still expect a bit of something for nothing. However, even if you are not giving anything but opportunity, show up and STAND YOUR GROUND!

Despite having no message, and being a pandering racist, I give Rahm Emanuel credit for getting booed while speaking on Chicago South Side. And you can bet that Emanuel had a team of well-armed body guards.

Take that to the alley Rahm…

I visited the “Souf” Side to work on a campaign for Paul McKinley, Republican candidate who received NO REPUBLICAN SUPPORT. One would think that McKinley would have been the Republican’s poster child to replace disgraced Jesse Jackson, Jr, but the Republicans were a no show.

What I learned while stumping with McKinley is, blacks in the urban indoctrination centers don’t like Democrats. And a big faction in Chicago have even more disdain for Barack Obama (who wouldn’t dare show up on the South Side), as Obama is about as black as Mitt Romney. And South Side Chicagoans know this.