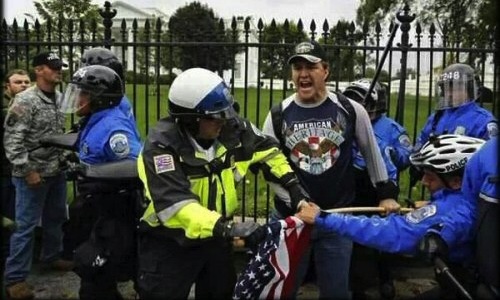 The flag being wrestled away from a veteran is a horrible thing. But that’s what we’ve come to expect from an Obama White House.

It shouldn’t be surprising to see that the same White House overseeing the removal of the message of Christ from our Military, would also oversee the debacle that took place when American Military Veterans arrived in Washington to claim their memorials.

There are many who look at the picture of the policeman wresting the flag from this man’s hands and claim we don’t know the “whole” story. Or that we “don’t know what the vet was doing with the flag”.

What was he doing with the flag? He was carrying it!

Illegal immigrants marched on our White House, and there were no riot police or snipers.

Muslims marched on our White House and there were no riot police or snipers.

But when our nations military veterans arrived, the police showed up in riot gear and in full force, and snipers were placed on White House. WHY? 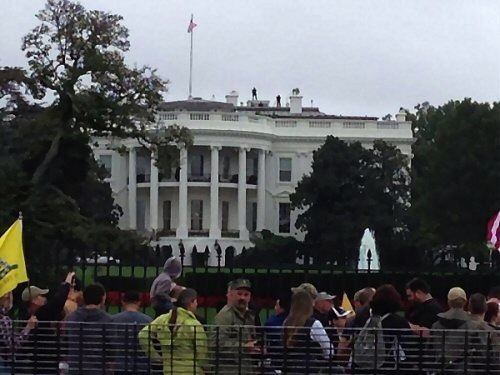 Do you think it was to protect our capitol against those who have literally risked life and limb DEFENDING it? NO!

The purpose, in my estimation was to infer these Patriots were dangerous. And quite possibly, to incite incidents like this.

I’m proud of the men and women who have given their lives to duty and honor for our Nations’ protection. And I’m proud of these warriors for the self-restraint they showed on that day.

But if you think for a second this incident, insignificant in relation to the overall event, would have happened were it not for the overwhelming police presence, I believe you’re mistaken.

Do you believe the response may have been an attempt by our White House to provoke our Military Veterans and cast them in a bad light?

That’s precisely what I believe.

It is the soldier, not the organizer, Who gave us the freedom to demonstrate

It is the soldier, Who salutes the flag, Who serves beneath the flag.

And whose coffin is draped by the flag, Who allows the protester to burn the flag.”