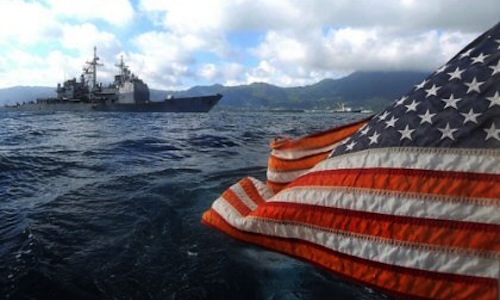 Eternal Vigilance is the Price of Liberty

Our primary responsibility as American Citizens in today’s political climate should be to fight for the freedoms afforded its citizenry these past 2 centuries.

Unfortunately, we’ve become accustomed to working only to maintain the status quo. Work, school, kids and family, they’re all important, but only inasmuch as we have the liberty to enjoy them.

Without liberty, America is no different than any other third-world country sitting under some two-bit punk dictator.

I can’t say it often or loud enough. We need to rid the hallowed halls of justice of those willing to surrender our God-given, Constitutionally declared rights. Our rights not just as Americans, but as human beings.

We have to continually remind, not only the Pelosis and Reids of the world, but the McCains, McConnels and the Grahams and Boehners as well. We need to remind them often and with great passion that this Nation was not constructed for their personal fulfillment. But rather to be a proving ground for personal, social and religious freedom, and a BEACON for ALL the world to see what ONE NATION UNDER GOD looks like!

This Representative Republic has prospered not only financially, but socially and spiritually because the people have individually and collectively fought to hold to the truths our Founders laid out in our Constitution and in our Bill of Rights.

Because many have lost sight of the primary goal (defending Liberty at all costs), we are in the precarious position of having to defend that for which so many have paid the ultimate sacrifice.

There are many Americans content with feeding at the Government trough. They’ve become unwilling to make the choices necessary to restore America’s greatness. Freedom-loving Americans MUST be willing to defend our Country from not only these, but against politicians who seek to enslave us all.

Know this: With every change comes pain. We have to understand change will not come without consequences.

Those who embrace Liberty have to be willing to endure hardship; to sacrifice comfort for real, effective change.

Our Nation and its principles were hard-fought and hard-won. Winning them back will be no walk in the park, I assure you.

The first thing needed is to clean the house of cockroaches. The vile pretenders to Conservatism who have wormed their ways into the Government need to be eliminated through every peaceful means at our disposal. First at the voting booth, then through prayer, next by political pressure, and finally by shame (for those Representatives still capable of experiencing such an emotion).

Next, we need to pledge our time, resources, voices and talents to putting into office the kind of men and women who would support our Constitution. Find local bodies of people who declare allegiance to the same core principles and MEET OFTEN. Hold each other up and encourage each other.

Take the time to define your core principles (based on sound Constitutional grounds), and then take the time to promote and grow the cause. If this sounds like a grass-roots effort, that’s because it is.

What, exactly do you think that small group of men we call the Founding Fathers were? A hockey team? NO! They were simply a group of concerned citizens from all walks of life who agreed on a few simple concepts. They didn’t let allow petty disagreements to cloud their perspective or keep them from seeing their vision come to fruition.

And the world prospered like never before in History because of those dedicated men! I’m not saying it will be a simple task. Far from it… but if we are not willing to feel the pain on this side of the battle, we’ll surely feel it on the other.

Above all, we need more men and women willing to take Liberty as their cause.

“Is life so dear, or peace so sweet, as to be purchased at the price of chains and slavery? Forbid it, Almighty God! I know not what course others may take; but as for me, give me liberty or give me death!” ~ Patrick Henry